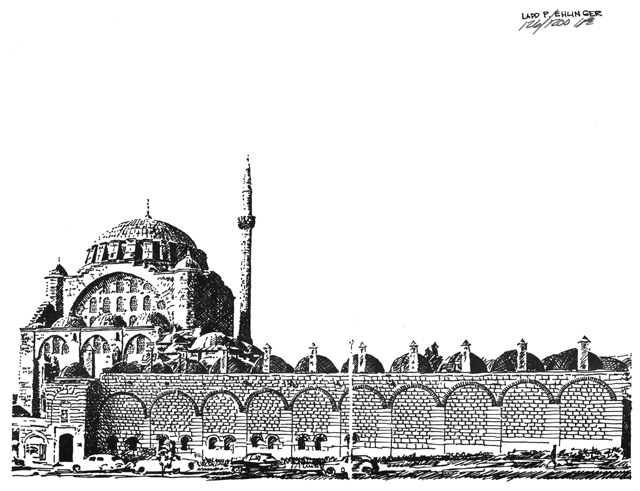 This issue’s limited edition signed print by Ladd P. Ehlinger is of the Mirimah Mosque in Istanbul, Turkey. The Mirimah Mosque is named after a Princess daughter of Suleyman the Magnificant and I-Iasseki-I-Iurem. Princess Mirimah was the benefactor/ donor of the funds to build the mosque. In 1539, she married Rustem Pasha, who later became Grand Vizier. She died in 1558. Some historians are inclined to date the mosque at the time of her marriage, but a later dating is more likely due to the style and architectural developments of the mosque.

Sinan was the architect of the Mirimah Mosque (see ESLA Newsletter, 3rd Quarter, 1990) and while the date of the Mirimah Mosque is not known, dates of other Mosques in various stages of development are known. The progression of Sinan’s architectural ideas can be traced through these other Mosques, and thus the Mirimah Mosque is believed to have been designed around 1555. Sinan tried for the first time in this building to support the dome entirely on the exterior walls, without use of half domes and huge thick walls to buttress the thrust (brace against the horizontal force) produced by the dome. In the Suleyman Mosque and in Sinan’s archetypal inspiration, Hagia Sophia (see ESLA Newsletter, lst Quarter, 1989) the main dome is braced by large half domes and large wall buttresses. The walls in these earlier works also do not have the clarity and crispness that those of the Mirimah Mosque possesses. The walls are treated as in-fill screens within the huge skeletal-like main arch/ walls that support the dome, and they are perforated with fenestration (window openings) to the degree that they almost disappear when inside the main space of the interior, while at the same time flooding the interior with an even light from all sides.

This quality of even light makes this Mosque a premier example of the goal of the Mosque: an inward oriented building whose prime purpose is contemplation and prayer.

The exactitude and crispness of the spaces coupled with the simplicity of the interior furthers this objective as well. Without the half-dome solution of bracing, the light level is even because of fewer shadowed spaces, and the detailing of the supports for the dome enhances this quality.

The low buildings in front of the Mirimah Mosque are called a medresse, which is technically a theological school. Sometimes hospitals, orphanages, and caravanserayes (hostels) were combined with the Mosque in one complex. In Sinan’s works there is a strong hierarchical order to the buildings in that the Mosque always dominates the medresse and any other buildings, and when the climate permitted, the buildings formed the arcaded sides of a courtyard open to the sky which served as a transition to entry of the Mosque. In the nineteenth century, the building was seriously damaged by an earthquake. The upper part of the minaret was damaged, as was the interior near the springline of the dome.