Palace of the Governors, Uxmal 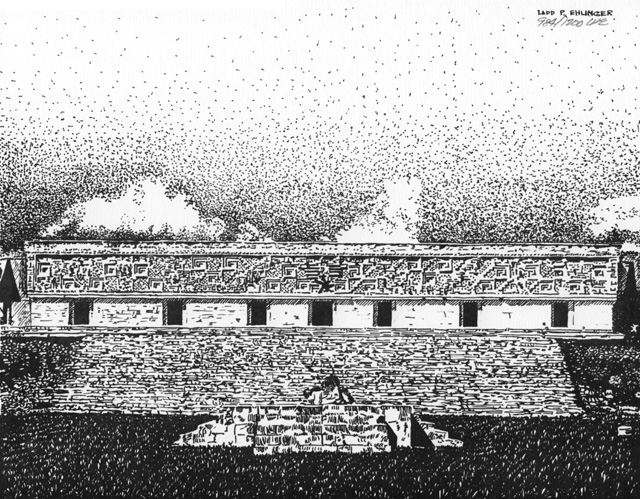 This issue’s limited edition signed print by Ladd P. Ehlinger is of the Palace of the Governors in Uxmal, Yucatan, Mexico. This palace was built in the eighth and ninth centuries A.D. by the Mayas in the Puuc style. Uxmal is in the northern zone of Yucatan and the name ‘Puuc’ is a Mayan word meaning ‘land of low hills’. Here the limestone plateau of the Yucatan peninsula is as flat as a tabletop and, although slight undulations of the ground appear here and there, the horizon line remains strictly rectilinear. The vegetation of the northern district of Yucatan is determined by the lesser rainfall of the almost arid region. The undergrowth is mostly a dry, deciduous scrub, and the trees seldom grow taller than forty feet. These environmental factors played a large role in preserving Puuc style buildings. In more tropical rain forests that the Maya inhabited, such as the Peten, the vegetation is much more destructive, and buildings in those regions are much more difficult to restore. In addition, the low vegetation and flat land, coupled with the generally short stature of the Maya, affected the character and proportion of Puuc style buildings as they are low and squat with horizontal emphasis.

Puuc style buildings are characterized by smooth walls surmounted by decora- tive friezes, separated by a band of wide molding, with the ornamented portion of the wall surmounted by another wide molding as a cornice. This form of double girdle surrounding the upper portion of the building derives from the linking cords which served to strengthen the walls of the thatched huts that the Maya lived in. As with most early stone architecture, structural elements of perishable materials such as wood or thatch were translated into stone. The actual function of the Palace of the Governors is unknown. The form and layout of the building however, does suggest that of a palace. It is 322 feet long, 39 feet in depth and Z8 feet high.

The building is composed of three blocks. The print depicts the central, largest block which is connected to the ﬂanking blocks on both sides by lofty corbelled vaults that mimic the form of the thatched huts. The arched openings formed by the vaults were originally left open, but were later walled up and fronted with columns.

The building sits on a high plateau which functions as a podium and is reached by a monumental staircase in front of which sits the throne of the two-headed jaguar. The symmetrical, yet cleverly irregular spacing of the doors indicates a lively feeling for composition. The central entrance doorway is surmounted by a great decorative feature which forms the hub of the freize design. The horizontal elements represent celestial dragons one above the other, while the remainder of the freize consists of Greek key ornaments over a network resembling an open work grating.

The civilization of Uxmal deteriorated badly in the 12th century, with the city barely inhabited from that time onward until the arrival of the Spaniards in the 15th century. The major reconstruction of Uxmal took place in the late 1930's and was performed by the Archeological Department of the Mexican government. There are still major monuments in the city that need to be restored, however.