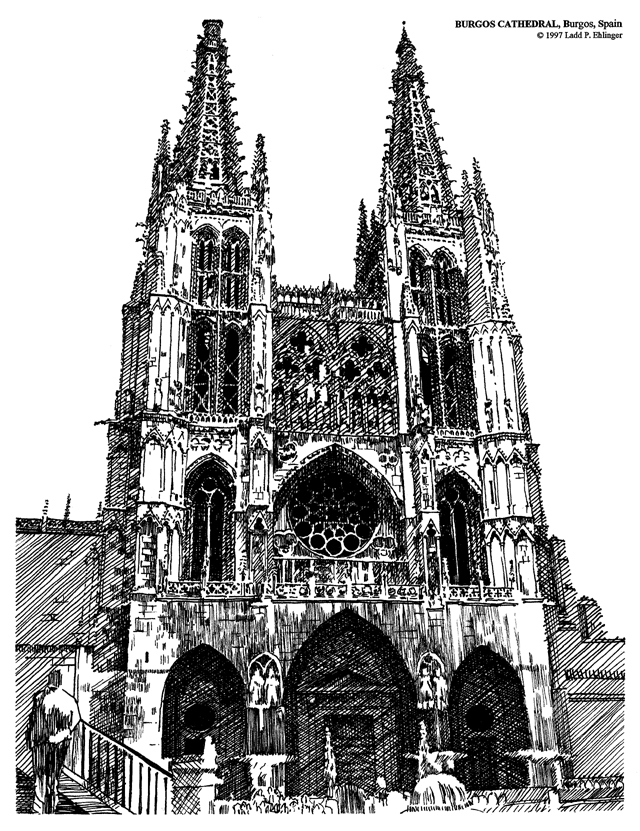 Burgos Cathedral, this issues' limited edition signed print by Ladd P. Ehlinger, is the third largest cathedral in Spain after Seville and Toledo. It is an extraordinary example of a reinterpretation of French and German Flamboyant Gothic Architecture into Spanish terms. The western facade towers echo those of Cologne, while the composition and proportions of the western facade mimics several French cathedrals such as Chartres. Construction began in 1221 with the laying of the foundation stone by Ferdinand III and was finally completed in 1457. Work on furnishings and decoration continued into the 16th century.

The province of Burgos is in the region of Castile and is sometimes known as the "Shield of Castile", being the capital in the old kingdom. The city stands in a shallow, windswept valley of the Rio Arlazón.

This is also the land of El Cid -- the colorful name for Rodrigo Díaz, the warrior hero whose legendary but ruthless exploits highlighted the history of Castile in the late 11th century. Díaz / El Cid supported various kings of Castile and assisted in the wars against the Moors in attempts to drive them out of Spain, which did not ultimately succeed until 1492. In this same year, Burgos relinquished its title as capital to Valladolid, but thereafter flourished as a commercial and artistic center. Burgos' most recent political involvement was as the founding city of the Movimiento Nacional in 1936 of General Franco, who in 1939 became the dictator head of government of Spain, ruling for many decades.

The exterior of the cathedral is a remarkable adaptation of the sloping terrain by shaping it into courts and cloisters that surround the entire edifice at different levels. The forecourt of the cathedral shown in the print is multilevel, with the view shown from an upper level. In fact, this forecourt reads as a depressed court that one goes down into to enter the cathedral. This is a very unusual forecourt treatment of a Gothic cathedral - most were without any forecourt or had grandiose ones but always on one level at the entrance level. Multiple stairs punctuate these changes of level and give one interesting views of the components of the cathedral from varying vistas.

The plan of Burgos cathedral is typically Spanish in that it is irregular. The chapels about the perimeter are not symmetrical about the main axis of the plan, the largest chapel at the peak of the ambulatory, the Constable's Chapel (Capilla del Condestable), is irregular and asymmetrical. The cloister is not parallel to the church nor its sides to itself. The nave is shortened to almost no nave at all by locating the choir (el coro) west of the crossing of the transepts upon which the octagonal lantern (el cimborio) is located above the floor containing the funerary stones of El Cid and his wife Ximena. Johan of Cologne was responsible for the west facade's openwork spires, pinnacles, crockets and balustrades. The north transept coronation door (El Coronería Portal) has jamb statues that are derived from their French Gothic heritage, but which have movement in the folds of the garments in the Plateresque style of Spain.

The constable's chapel has a circlet of crocketed pinnacles above its octagonal lantern that is one of the outstanding features of the cathedral. It was designed by Simon of Cologne for Hernández de Velasco, Constable of Castile in 1482, in the Isabeline style. The constable and his wife are buried in the chapel. There is a door from the constable's chapel leading to the Sacristy where there is a painting of Mary Magdelene by Leonardo da Vinci.