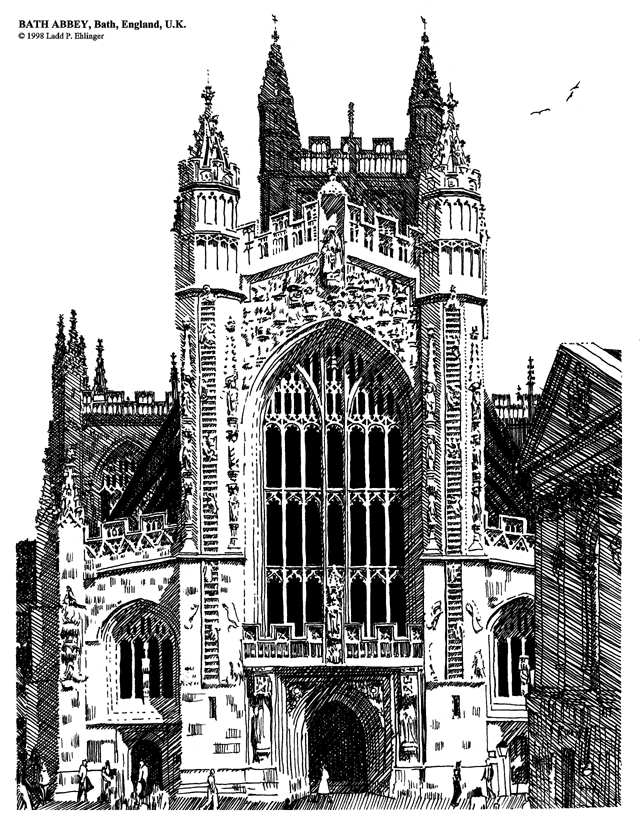 England’s only hot springs surfaced at Bath approximately 100,000 years ago. Prince Biadud (the father of King Lear) was purportedly cured of leprosy by wallowing in the mud here around 500 BC. The Romans capitalized on the springs and made Bath into a spa and resort with public bathing facilities, a temple, and other public facilities, all centered around a square in the center of the town. After the Romans left, the Saxons took the town and built within the original Roman walls, including the abbey. In the English language, ‘to take a bath’ comes from this Roman spa development.

The present abbey stands on one side of the main square at 90 degrees to the bath and spring building. It was begun by Bishop Oliver King in 1499 and restored by Queen Elizabeth I in the 16th century. It occupies the same site as the nave of a previous Benedictine Norman cathedral built by John de Villula of Tours, Bishop of Wells. The current abbey is in the English Perpendicular Gothic style, characterized by very narrow and vertical spaces and masonry forms, and fan vaulting over the nave and aisles. The architects of the fan vaulting were Robert and William Vertue, who also designed the fan vaulting of the Henry VII Chapel on the east end of Westminster Abbey in London.

The west facade, shown in this issue’s limited edition signed print by Ladd Ehlinger, features a perpendicular window above a 17C main carved wooden door, that is framed by engaged octagonal towers with tall ladders carved into the stone, with sculptured angels ascending and descending the ladders. The abbey has been restored multiple times over the centuries, and the appearance has markedly changed.

Bath changed over the centuries as well. By the eighteenth century, it had become the fashionable resort for royalty and the nobility of England. There are two famous architectural masterpieces that were constructed during this period that are worth seeing: The Royal Crescent and The Circus, both designed by John Wood II. The Royal Crescent consists of a great arc in plan of thirty terraced attached townhouses. There are 114 Ionic columns that balance the curved horizontal lines of each story. The circus is a complete circle in plan of attached identical townhouses whose curved facades match the circus (street) pierced by three access streets. The Circus is joined to the Royal Crescent by Brock Street, also designed by John Wood II.