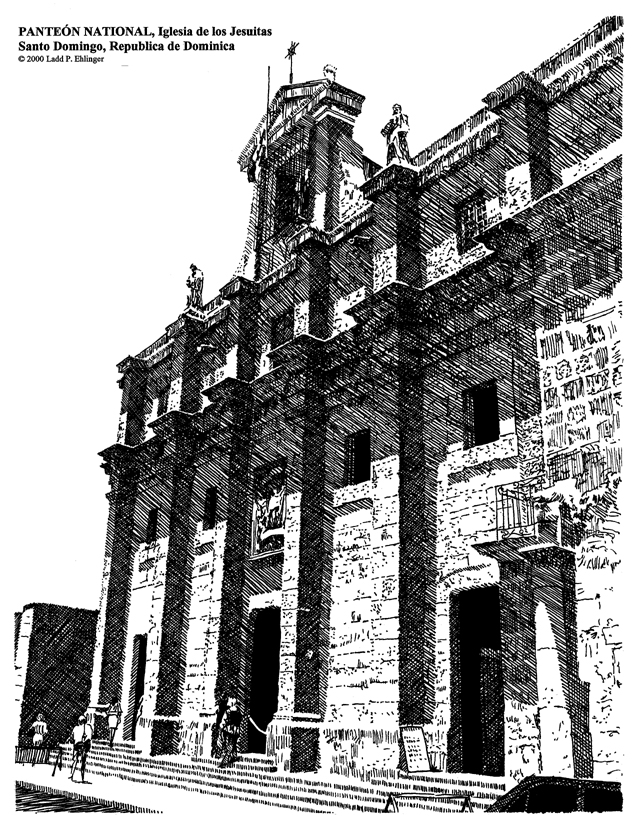 The National Pantheon of the Dominican Republic was originally built as the main Jesuit church between 1714 and 1755. The main facade of this issue's limited edition signed print by Ladd P. Ehlinger faces east on Calle de las Damas ("Street of the Dames"), which is very unusual for a Roman Catholic church. Usually the main entrance faces west of Roman Catholic Churches.

This street was named "Street of the Dames" because Señora Maria de Toledo, the wife of the Viceroy, Don Diego Colón, used to take long slow walks with the young ladies that she had imported as her 'ladies in waiting' to this first Spanish colony in the early 1500's. It had originally been named "King's Street" because the palace of the Viceroy also faces on it.

Santo Domingo was settled originally by Christopher Columbus (Cristobal Colón in Spanish) himself, and is the oldest city of European descendants in the Americas. The Viceroy was his brother. The city was founded on the Ozama River, at first on the west side, but a year or two later it was moved to the east bank which was not as vulnerable to hurricane damage.

The style of this Jesuit Church is of Renaissance neo classic, which is characterized by severe and sparse lines and form. The plan is a Latin cross, typical of a Jesuit church. The superstructure is of groin vaults with a dome at the crossing, constructed in both brick and stone and plastered. The doors are spare with no decoration but an ogee arch over the main door. The pilasters are also spare, with the two center ones being narrower than the others but having an additional molding on the plinth of their bases.

The Jesuits were an adjunct to the Spanish Conquistadors, helping to colonize the new world. Yet when the Reformation happened, there was a backlash against the Jesuits even in Spain. They were expelled from all of the Spanish territories and their churches were converted to theaters, warehouses, offices - whatever was practicable and needed at the time. This facility was finally converted to the National Pantheon, where the heroes of the country are buried, in 1956. General Pedro Santana, a five term President of the Dominican Republic, is buried here.