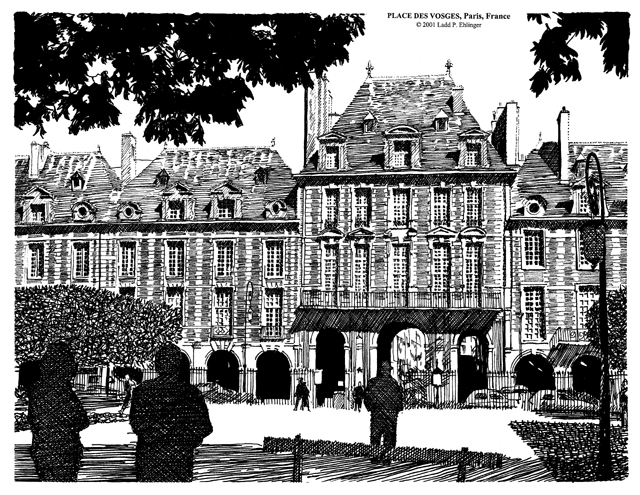 This issue's limited edition print by Ladd P. Ehlinger, is of a few of the 36 private hôtels (apartments or Maisons) that surround and surmount the shops behind the arcaded urban square named Place des Vosges. This is the oldest square in Paris. This complex was most likely designed by Claude Chastillion for the King, and is in the French Classical Renaissance style. It was built in 1605-12 during the reign of Henry IV. The King wanted all of the houses built "to a like symmetry", and originally named it Place Royale or Royal Square. It is 354 feet square and was a center of elegance, courtly parades and festivities, although duels were fought here despite Cardinal Richelieu's ban. After the revolution it was renamed Place des Vosges after the Vosges departement, the first to pay its taxes.

The Renaissance style in France is usually divided into three periods: Early (1494-1589); Classical (1589-1715); and Late (1715-1830). The French Renaissance style is easily distinguished from the Italian or English Renaissance by the vertical proportions and emphasis, particularly evidenced in the steep roofs, and in the large oversized windows. Decoration is coarse, with much emphasis on rustication of stone elements. Exterior design is usually simple, especially in contrast with the interiors, but great emphasis is placed upon defining and articulating urban and garden spaces with building components. For instance, the pavilion with the taller arches and taller roof to the left of center in the view of the sketch serves as a focal point along that side of the square and an entrance portal from the street that rings the Place des Vosges square to an intersecting street.

The construction of the hôtels is of brick with stone quoins at the corners, window and door jambs and intersecting walls, and stone chaînes that are used in lieu of pilasters between string courses to vertically define the critical visual horizontal limits of architectural elements into wall panels, such as on the taller arched pavilion. The chaînes are on its corners.