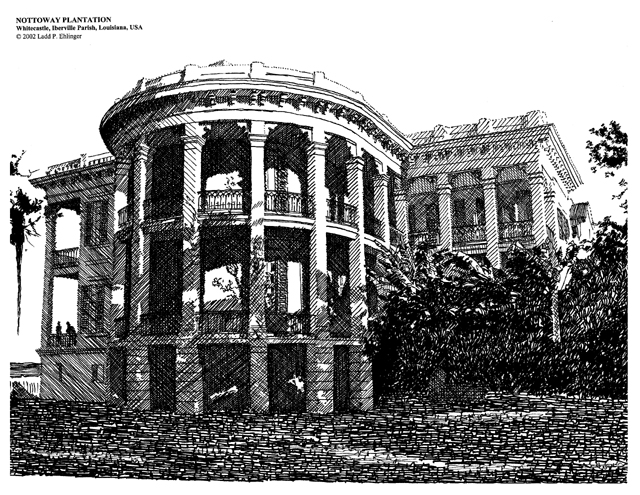 Nottoway Plantation house, this issue's limited edition print of a sketch by Ladd P. Ehlinger, near Whitecastle in Iberville Parish, Louisiana is one of the largest plantation houses ever built in the southern region of the U.S. Designed by the renowned architect Henry Howard as a result of an informal competition of several submittals by architects to John Hampden Randolph, the owner. Randolph's father had come to Louisiana from Virginia in 1820, and brought with him the tradition of the planter's life, which was maintained and expanded by his son.

Nottoway plantation consisted of 6,200 acres purchased by the father in 1841, who initially built the plantation with 155 African slaves into a sugar cane business. The son expanded the plantation business and it became very profitable -- so much so that one of the most ambitious mansions of the south was initiated and completed in 1858.

The main house is placed about 200 feet from and faces the Mississippi River among oaks, magnolias, pecan trees and sweet olives. It is composed of 64 rooms on three levels with the crowning achievement being the semi-circular Ballroom on the first level, with the Master Bedroom above that can be seen in the sketch in the center. The columns and brackets and the 200 or so windows are all tall and narrow in the Italianate style. The entablature is heavy and with the Italianate brackets is close to the evolving Victorian style. The balustrades are cast iron as most of the New Orleans balconies were, but of Italianate motifs. The exterior and interior of Nottoway is white in color, including the interior Ballroom Corinthian columns, marble mantels, curtains and even the floors. A neighbor built an even larger plantation mansion called Belle Grove of pink brick and plaster to deliberately contrast with Nottoway's white. To oneups-man-ship Rudolph further, Belle Grove was designed by the same architect, Henry Howard. Belle Grove is in total ruin today, while Nottoway survives with grace.

In 1862, Randolph took most of his slaves and went to Texas to work a cotton plantation to keep his business afloat. His wife, Emily Jane Liddel Rudolph stayed behind with most of their ten children to keep Nottoway safe from harm and to run it as best she could under the circumstances. The teen age daughters were sent away to a safer location. Emily Jane at the age of 45 protected the house when Union gunboats were in a battle with Confederate troops on her front lawn. The gunboats actually shelled the house inadvertently. The Union officer in charge of one of the gunboats realized that he had stayed at Nottoway before the war and stopped the shelling, sparing the house. The Union army never entered the house other than to search for weapons, though they did bivouac on the grounds.

Today, Nottoway has been fully restored and converted to a Bed and Breakfast and serves as a living museum of plantation life. The main house, out buildings and cabins are furnished as hotel rooms in the style of the plantation days. Tours call on the facility, and are fed in a large meeting room / restaurant that has been built for that purpose. The price is moderate and worth the visit. You may reach them at www.nottoway.com.