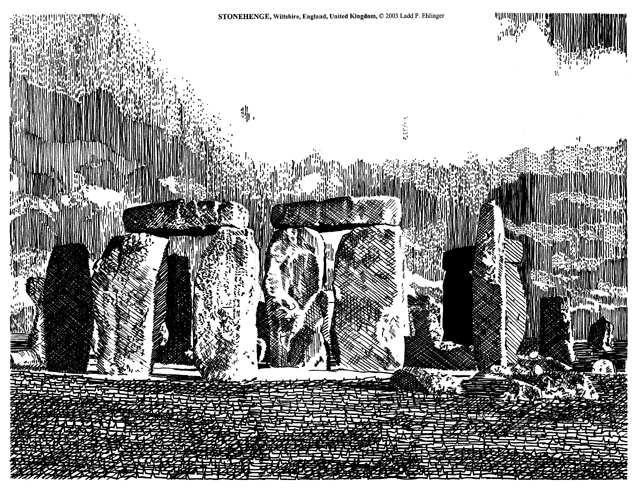 Stonehenge is an ancient, mysterious, megalithic monument on the Salisbury plain in Wiltshire, England, near the town of Salisbury. This location is on a high rise in the plain that is wind swept year round such that it seems to always be cold and forlorn. The origin and true, exact purpose of Stonehenge is unknown. There are multiple theories, but the one that has been totally debunked is that the Druids built it for their religious rites. The Druids did however utilize it when they came on the scene in approximately 300 BC. Historians are certain that Stonehenge was completed approximately 1,000 years earlier than the Druids arrival.

This monument was built perhaps as an astronomical clock to mark the seasons, particularly for planting. The axis of the site is aligned with the Summer solstice, such that the rising sun of that day aligns with what is called a Heel Stone outside of the outer circle of stones, and a pair of sarsens (large, upright stones) and an altar in the inner circle of stones — much like the sight on a rifle. The equinoxes are also represented by minor axial relationships.

There is a more recent theory by Dr. Anthony Perks that Stonehenge was also built as a symbolic female genitalia, the vulva and va- gina; including the labia majora and minora, the clitoris and the opening of the birth canal, when viewed by the “Eyes of Heaven”. The depiction of the anatomical parts is being represented by the inner and outer circles of stones, as the parts appear at the time of birth. Dr. Perks theory was presented in the February 2003 issue of the Journal of the Royal Society of Medicine.

What we do know factually though is equally interesting. Stonehenge was begun as a monument somewhere between 9,000 and 8,000 years ago when four Mesolithic pits were dug which contained nine wooden posts erected in alignment 200 m from the present site. Between 5,000 and 3,000 years ago, the present complex was begun.

Stonehenge 1 consisted of the con- struction of the circular bank at the outer perimeter, the ditch, and the 56 Aubrey holes (named after the antiquary, John Aubrey, who erron-eously attributed Stone-henge to the Druids), which holes probably originally contained timber posts.

Stonehenge 2, from 2500 BC, consisted of a complex of timber posts in the interior and the entrance causeway. Cremated human re- mains have been re- covered that had been placed in the ditch and the Aubrey Holes that were partially filled, along with pottery and animal bones.

Stonehenge 3, from 2100 BC, forward consisted of the stone structures probably constructed in the following sequence:

1. Bluestones from Wales were erected in the inner circle or horseshoe and then dismantled. The Bluestones were from the Prescelly mountains, located roughly 240 miles away at the southwestern tip of Wales. The Bluestones weigh up to 4 tons each and about 80 were used. Given the weight and distance, these stones presented quite a logistics problem.

2. The sarsen stone circle (outermost) and trilithons (3 stones: 2 vertical one lintel in inner horseshoe) erected with possibly also a Bluestone setting which may have included trilithons, this latter then dismantled. The sarsens weigh as much as 50 tons each and came from the Marlborough Downs, roughly 20 miles to the north.

5. Y and Z holes dug (concentric rings about the inner horseshoe) probably for stones which were never erected. During this phase the avenue was also constructed.

The lintels on the sarsens are secured vertically by mortise and tenon joints and horizontally by tongue and groove joints. All of the stones were transported and erected apparently without draft animals, much less with mechanical equipment.

Today, Stonehenge is owned by the organization English Heritage, and the surrounding lands by the National Trust. There are ongoing efforts to protect, preserve and even enhance this world class treasure. One of the measures being advanced is to move the major highway that is 100 m from the site to a more discrete location.