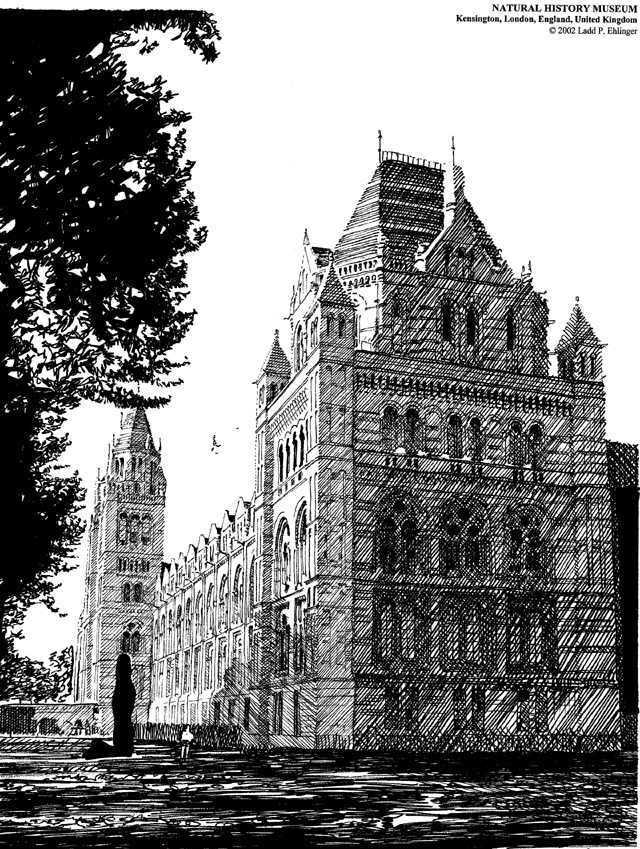 This issue’s limited edition print by Ladd P. Ehlinger is of the Natural History Museum located in the Kensington District of London, next to the Victoria and Albert Museum. The main building was built between 1873 and 1880 in the motif of Rhineland Romanesque cathedral architecture superimposed upon a Beaux Arts palace composition. The building is symmetrical and huge — 657 feet from end pavilion to end pavilion. The center is dominated by twin towers that frame the cascading Romanesque recessed arched entrance (to the left in the sketch).

The walls are composed of terracotta blocks in buff and slate blue hues, an unusual and striking color combination. The decorative sculptures in the arches and elsewhere include lifelike moldings of animals, birds and fishes: live ones in the western half of the building and extinct ones on the eastern half.

The architect was Alfred Waterhouse. He also designed the Town hall of Manchester, which has been described as a classic of its age. Other notable buildings by Waterhouse were Owens College at Manchester University and a number of buildings for the Prudential Assurance Company, which he designed in red brick and terracotta.

This Natural History Museum was chosen for this issue’s sketch because it is a prime example of the Beaux Arts palace composition. In Beaux Arts theory, the visual terminals (the end pavilions and the central entrance) were emphasized by making them much larger and prominent than the balance, and then connected with rhythmic identical elements - the arched bays between topped with gables. The “style” didn’t really matter: it could have just as easily have been French Renaissance or Continental or Greek Revival. The massing composition of the building would have been the same.

This museum has over 50 million specimens and continues to grow with each year. The main galleries are devoted to life and to the Earth.