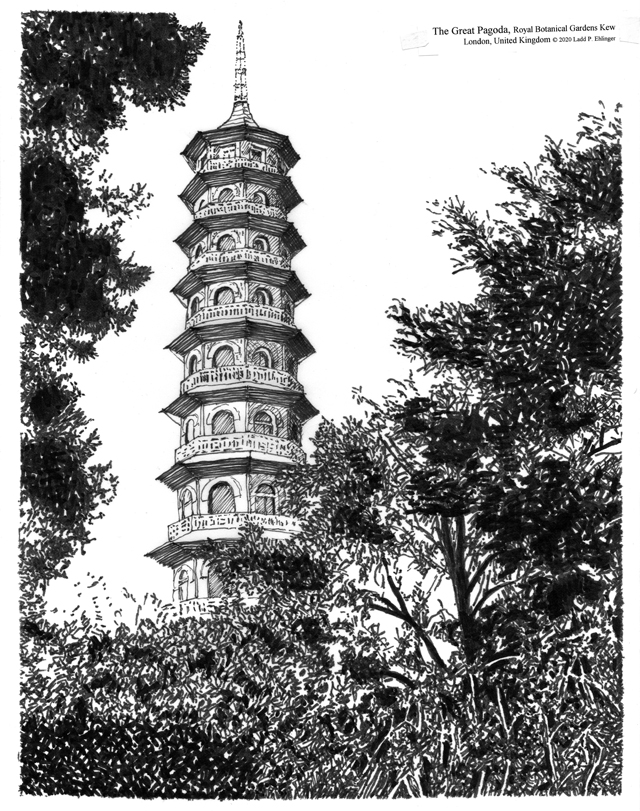 The Great Pagoda at Kew Royal Botanical Gardens in London is the subject of this issue's limited edited print of a sketch by Ladd P. Ehlinger, AIA. Pagoda is a Chinese term for a Hindu or Buddhist temple or sacred building that is a multitiered tower. Pagodas are used as a depository for sacred relics and a place for contemplation. It was designed by the English architect Sir William Chambers for Princess Augusta of the royal family, founder of the botanical gardens. It was completed in 1762 - 14 years before the American Revolution! Chambers had visited China twice, and was very inspired by the Porcelain Pagoda in Nanjing, and used it as the paradigm for the Great Pagoda.

The Great pagoda is 163' tall with a climb of 253 steps. It is so tall the public at the time considered it to be unstable and likely to not be standing for very long - despite the fact that the views of London from the top story are spectacular. It is an octagon in plan, 10 stories tall. Each story is approximately one foot less in diameter than the story below it. Traditional pagodas in China were supposed to be an odd number of stories, usually 7, as in seven steps to Heaven. The Great Pagoda was originally more colorful than it is today, and had 80 iridescent painted wooden dragon sculptures at the junctures of each guardrail on each octagon level. These quickly rotted and were removed in a 1784 remediation. A current remediation conservation project underway on the Great Pagoda is replacing the dragons, and is supposed to be finished in June 2020.

The Porcelain Pagoda in Nanjing was actually taller than the Great Pagoda. It was 260 feet tall, a base octagon of about 97 feet, and had nine stories with 184 steps (which had to be rather tall risers). It was called the Porcelain Pagoda because it was constructed of multi colored glazed bricks, which made beautiful patterns on the walls, both interior and exterior. It was designed and built c. 1402-1424 as a part of the great Bao'en Temple.. It was destroyed in the Taiping civil war in 1854.