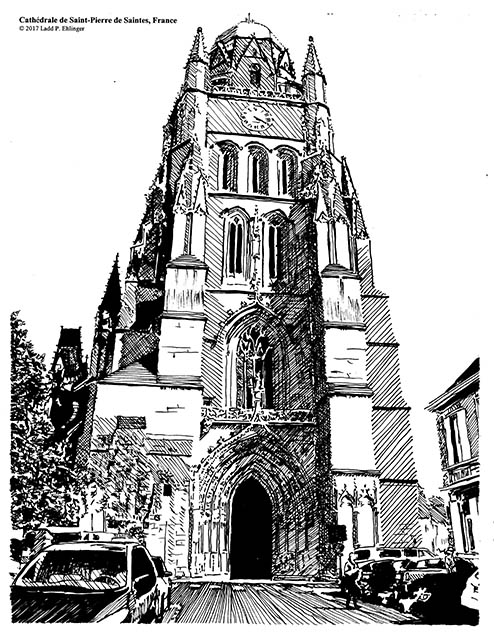 The Cathédrale Saint-Pierre de Saintes is a very architecturally unusual French Gothic church with an equally varied history. The building was originally a Roman Catholic building, but is now owned by the government and functions as a national historic monument. It is located in the City of Saintes in the CharanteMaritime Region, between Bordeaux and La Rochelle.

Saint-Pierre was built over an original church from the sixth century. The cathedral was developed over many centuries and styles, beginning in Romanesque, then Gothic, and finally Flamboyant Gothic In the late twelfth century it was burned down during a siege by Henry Plantagent in 1174. The Hundred years war later followed with even more disastrous impact on the building.

Construction began around 1450 to rebuild the church in the Flamboyant Gothic style. This is when the bell tower porch was begun. The bell tower is shown in this edition’s print of a sketch by Ladd P. Ehlinger, and depict a vertical triangular mass striving for the heavens, yet capped off by a silly little dome instead of the fleche (literally “arrow”, a spire) it was intended to have. The Transamerica Tower in San Francisco has a similar triangular massing, and would look just as incomplete if the upper stories above the main elevators were lopped off also.

Money was the issue - there simply wasn’t enough to build out the cathedral completely. The Diocese was not especially wealthy, so indulgences were sold to raise money - a major scandal ultimately. However, a little over a hundred years later in 1568, Protestants in their revolution, ransacked the church and destroyed most of the nave and the aisles along with the choir in the chevet: the vaults collapsed. So in the reconstruction that followed in the Seventeenth Century, the original wall height of the nave was not restored, nor were the ribbed groin vaults restored in the nave or the choir. The nave was roofed over with wood trusses and planking, and the choir was roofed over with a wooden ribbed barrel vault with planking - all pretty but inauthentic architecturally, yet they met the budget.

The portal of the bell tower is reputed to be the finest example of late (Flamboyant) Gothic in western France. The parallel arches contain magnificent sculptures, though many are damaged from vandals. The other sculptures of the cathedral are extraordinary also, the gargoyles (decorated rain-spouts) and the marmosets (similar to gargoyles, without drainage function, used to accent).

In the total ensemble, there are multiple chapels about the aisles and off the ambulatory. There is a cloister with other Diocesan buildings fronting on it, such as the Chapter House and Library.