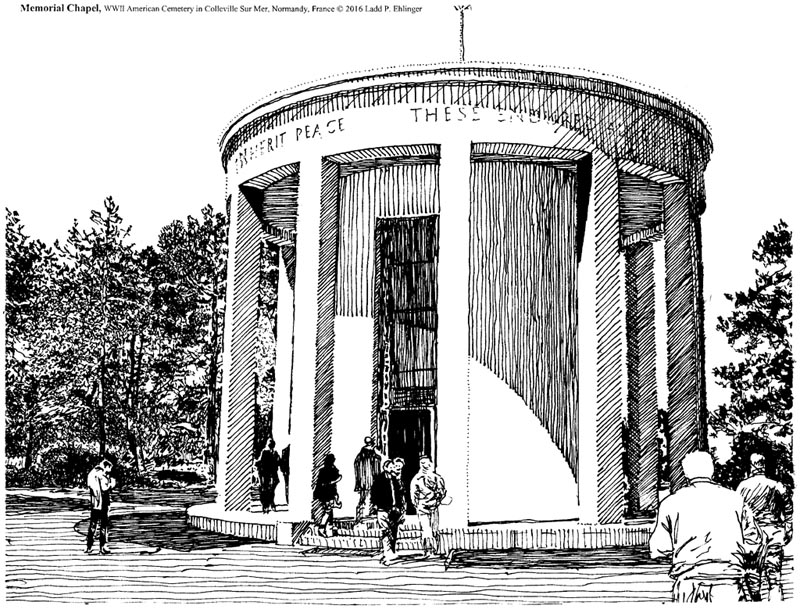 In the summer of 1978, my wife and I took our three young sons (almost 10, 8, and 5 years old each) to meet their French cousins and attend one cousin’s wedding. After the wedding, Jacqueline, the mom of the groom, 18 years my senior and previously a French underground freedom fighter, insisted that she babysit our boys for 3 or 4 days, while Dana and I went to see the beaches of the WWII invasion. From N. D. de Gravenchon (Our Lady of the Gravel Pit) near Le Havre where Jacqueline lived, we drove first to Caen, from where William the Conqueror ruled Normandy before his invasion of England in 1150 A.D., and saw the two famous churches: Abbaye aux Hommes, and Abbaye aux Dames (the Abby of Men and the Abby of Women).

We drove first to Sword Beach, then Juno Beach, and working our way down to the west, Gold Beach and finally Omaha Beach. We stopped to see much of the detritus of WWII: tanks, landing craft, parts of the artificial harbor, etc. that was still there at that time, and went in the French and the British Museums on the beaches. There was scarcely a mention in the museums, or on the beaches for that matter, of the American contribution, effort and enormous sacrifice of thousands of young men that had died there. It was as if America had not existed.

In my pre-teen years there had been a TV series called "Crusade in Europe", narrated in part by then 5 star Gen. Dwight David Eisenhower, who had commanded the whole invasion. It told the complete story of the preparation for, and the actual invasion, and the campaign on into Germany and the ultimate surrender of the Germans. So, I knew the history very well, including the fact that the landing craft, which really won the invasion, were invented and produced by a New Orleans boat builder named Andrew Higgins.

By the time we had traversed all of the beaches and at the end of Omaha Beach, I was sufficiently irritated and angry at this slighting of America, and the slanting of the real history of what had taken place here on the beaches. And then, at the western end of Omaha Beach was a very small road sign with an arrow pointing left (south) up the cliff, and labeled "German and American Cemeteries." We took the left, and about half way up the rise encountered the German Cemetery.. It was overgrown with weeds, the headstones in disarray, the iron cross topped fences were toppling - a forlorn and desolate place with the look of despair and defeat.

We continued on up with the road and small signs leading us to a gravel surfaced parking area, perhaps 3 to 4 acres in size, its boundaries defined by hedgerows about 18’ to 20’ tall, which were pierced by one arched tunnel leading north to the beach and cemetery. We walked through the hedgerow tunnel on axis to a view of the Chapel, the sketch of which is this issue’s print, and an explosion of space with a view of the pines and cedars on the bluff’s edge at the sea beyond, the monument peristyle to the east inscribed only with names of those who died on one huge tablet (no grandiosity here with memorialized and lionized leaders), and a map of the battle on its twin to the south, and thousands of crosses and Stars of David, both on stems perfectly plumb, in perfect alignment in all directions, with not one blade of grass growing up a stem! This was the essence of America!

The Normandy American Cemetery and Memorial is located in the town of Colleville sur Mer, France just above and overlooking Omaha Beach. It was founded June 8, 1944, and is managed by the American Battle Monuments Commission. It is 172.5 acres, and contains 9, 387 U.S. service men, 307 of whom are unknown. Three are Medal of Honor recipients, four are women. There are 33 pairs of brothers buried side by side, and one father and son.

It was designed by the Philadelphia firm Harbeson, Hough, Livingston & Larson, the successor firm to The Offices of Paul Phillippe Cret. Cret had developed a style of a variant of Art Nouveau that was severe and monumental for governmental buildings. Albert Speer had done a similar thing in Germany for Adolf Hitler, and his buildings were very severe, so much so, that they were designated as “Nazi Architecture”. Cret had done many federal buildings in his style in the 30s and 40s, such as the Eccles Building. He also had taken on many younger architects as partners and made them promise to eliminate nis name from the firm after his death, which occurred in 1945. The Landscape Architecture was provided by Markley Stephensen, and the Sculptor was Donald de Lue.

The layout of the cemetery is that of a Latin Cross, with the Chapel in the crossing, and the peristyle tablet monument to the east - both designed in Cret’s style, and beyond that, a curved garden wall on which is inscribed the names of 1,557 soldiers who died in the Normandy campaign but whose physical remains could not be found.

In the intervening years since 1978, the cemetery has become a tourist destination. To accommodate the increase in tourists, changes have been made. At my last visit in 2013, there has been a Visitor’s Center built on the east side near the bluff, and a huge parking area for both cars and tourist buses, and Rest Rooms for the tourists. All these facilities are well done in and of themselves - but the Wrightian style of the Visitor’s Center does not respect the Cret styled buildings, nor does the change of entry to the cemetery from the south to the east respect the drama created at the old east entrance. So, a lot has been lost accommodating the tourists. However, the cemetery is still beautifully managed and maintained, and well worth visiting. It is still a moving experience.