Church of Our Lady of the Holy Spasm 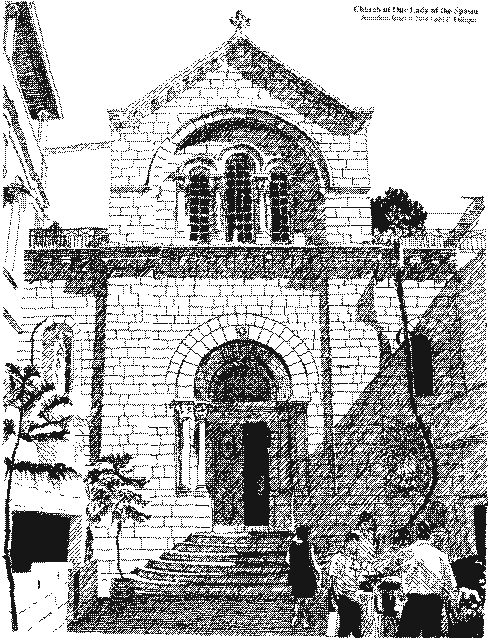 This issue’s limited edition print is of the Church of Our Lady of the Spasm in Jerusalem on Station Four of the Via Dolorosa, of a sketch by Ladd P. Ehlinger. This unusual name is probably the result of the difficulty in translation from the various languages that were used in formulating the concepts of the Via Dolorosa and this church not being easily translatable into English. Via Dolorosa translates as “The Way of Anguish”, or “The Way of Grief”, or “The Way of Sorrows”, meaning that the exact Latin meaning combines all three definitions simultaneously, and is a name depicting the route that Christ took carrying the cross on the way to his crucifixion. There is no English word that combines all three meanings. In very early Christianity, it quickly became a tradition for the devout Christian pilgrims to retrace this final journey of Christ, and it became known as “The Stations of the Cross” where each specific incident along the way was commemorated by prayer at each specific Station where the incident occurred. Altars were erected at each station at which to pray.

The early Christian’s tracing of the Via Dolorosa was in imitation of the mother of Christ’s (Mary) being reputed to have done so on a regular basis in the years immediately after His death, to have revisited her divine Son’s last journey and all the passion associated with it by walking the route. At the location of what is now the fourth Station, she is believed to have met him for the first time in His journey with the cross, and to have “swooned” or “fainted” or as originally translated in English, to have “spasmed”. The earliest record of Mary’s retracing of her Son’s journey goes back to 345 AD. She was said to have done this walk of the Via Dolorosa every day of the remainder of her time on earth. Eventually this walk became a tradition. The biblical texts only talk about half the Stations, the rest evolved in tradition. The number was finalized into fourteen Stations by the sixteenth century.