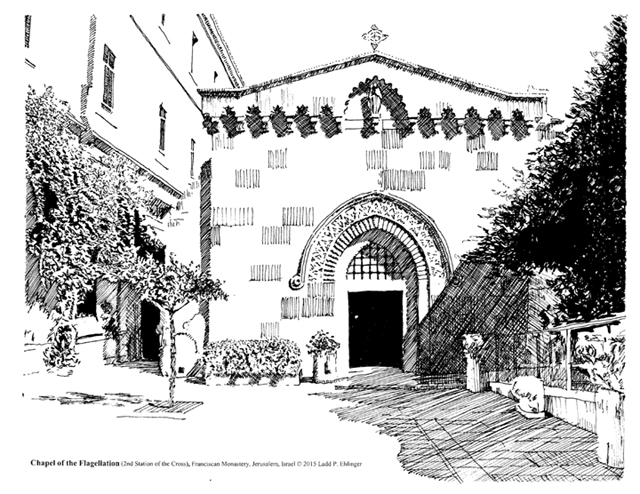 The Chapel of the Flagellation is located in a Franciscan Monastery (Roman Catholic) on the Via Dolorosa (The Way of Sorrow or Grief) in the Muslim Quarter of Old Jerusalem, which is north of the Fortress Antonia (the so-called Temple Mount). This statement is meant to tell the reader that Jerusalem is full of mistaken traditions, of which this chapel is a major one.

The Chapel is located at the 2nd Station of the Cross, where Jesus was believed to be scourged immediately before He took up the cross on the Via Dolorosa. The Via Dolorosa commemorates the journey of Christ from His judgement and condemnation by Pontius Pilate, the Roman Governor, to the scourging, and He taking the cross ultimately to his crucifixion and Golgotha (the place of the skulls), and several other stations of the Way of the Cross which are enshrined in the Church of the Holy Sepulchre. In the time of the Crusaders, this spot was thought to be where the pavement was upon which Pilate judged and condemned Jesus to death, based upon the presence of Roman paving stones. Modern archaeology however, tells us that these stones were actually part of the east Roman Forum, one of two forums at the time of Christ. The site of this Forum had been pre- viously an open air pool, the Strouthian Pool which was con- structed by the Hasmodians. We know all this from Flavius Josephus, a Ro- man historian at the time who was also raised as a Jew, that mentioned the Forum as being adjacent to the Fortress Antonia in the first century.

We also now know from Josephus that Pilate, the Roman Governor, held his hearings and made his judgements in Herod’s Palace at the other end (south) of the Fortress Antonia at the Western Hill, what is now at the Jaffa Gate, and while the way that Jesus followed may well have wound up at the Golgotha enshrined in the Church of the Holy Sepulchre, the other “stations” took place at other locations. To further confuse matters, there were multiple “golgothas” during the first century as well.

Its interesting to note that the Romans under Hadrian in ca. 70 AD forcibly emigrated all of the Jews from Israel in the diaspora, and destroyed the Temple completely. Remember Jesus reportedly predicted that “not a stone will remain standing after I am gone”. Those non-Jews that remained had little interest in Jewish landmarks or history. When the Crusades began 9 centuries later, there were no historians or residents who recalled much of anything in the first century.

The site of the Chapel began as a church about that time based upon the erroneous information, and was destroyed and rebuilt several times. The present facility was a remodeling / replacement for one built in 1839 by Duke Maximillian Joseph of Bavaria over the remains of the Crusader pilgrim shrine. The complex was given to the Franciscans by Ibrahim Pasha of Egypt in the 19th Century. The present church was built in 1929 as a complete reconstruction in Byzantine style by the Architect Antonio Barluzzi. The interior is a series of plastered masonry groin vaults with a single aisle, and several significant stained glass windows.

Another totally erroneous tradition that began about the time of the Crusades and intensified in the 19th century was that the Jewish Temple resided upon what is now called the “Temple Mount”. Devout Jews go to the western wall (the “Wailing Wall”) to pray today, and to pray for the rebuilding of the Temple. We know again from Josephus that the “Temple Mount” is actually the base of the Fortress Antonia. The Romans built a large masonry base of approximately 34 acres of this man-made hill to dominate the city and the populace. The actual Jewish Temple was 600' due south of it and connected to it by a pair of masonry arcades which allowed the 10,000 Roman soldiers garrisoned there complete dominance over the often rebellious Jews - the whole reason the fortress had been built to begin with. On top of this base were barracks, Roman temples to Roman gods, warehouses and administrative buildings. The four corners of the base had towers built, and the one on the southeast corner was taller for observations of the Jewish Temple courtyard that it overlooked. The Jewish Temple was built over the Gihon spring, a constant source of water needed to wash away the blood from the animal sacrifices. The spring and drainage channels are still there as are basement rooms of the Temple that were well below grade.

The Romans did the identical thing in Baalbek, at the lower end of the Bekaa Valley in Lebanon. They rebuilt the Temple of Baal, and built a fortress on a platform just like the one in Jerusalem to overlook it, with barracks, temples, warehouses, and administrative buildings, where they could intimidate and manage the populace below.