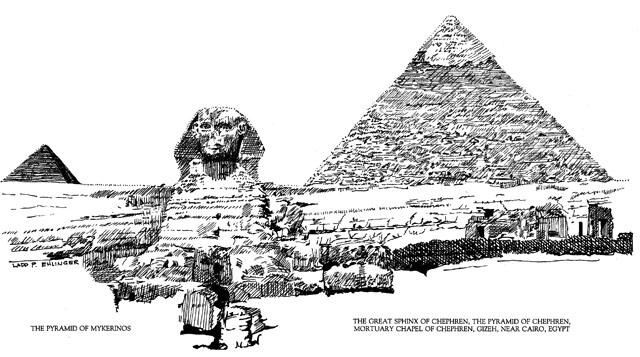 This issue’s limited edition signed print by Ladd Ehlinger is of most of the tomb architecture at Gizeh, near Cairo, Egypt. Shown in the sketch from right to left are the Pyramid of Chephren (Khafra), the Mortuary Chapel of Chephren, The Great Sphinx of Chephren, and the Pyramid of Mykerinos (Menkaura). All of the structures at Gizeh date from the Fourth through the Sixth Dynasties (c. Z800 BC to Z500 BC) of the Ancient Kingdom (Dynasties LX, c. 3200 BC to Z130 BC), and were built as tombs, mortuary and chapel structures for the Pharohs and other royal personages of ancient Egypt.

There are three large pyramids at Gizeh, the largest of which is that of The Great Pyramid of Cheops (Khufu), which is not shown in the print. Also not shown are the various mastabas, small pyramids, rock tombs, Valley Buildings, and causeways at the complex, as it is too vast to encompass in one view. The architects for the various buildings at Gizeh are unknown. The only known architect from the Ancient Kingdom period is Imhotep, architect of the earlier Pyramid Complex of the Pharoh Zoser at Sakkara. He was also the first known medical doctor, and was revered in his own time and later times, so much so that he was deified in the Twenty Sixth Dynasty.

The purpose of the pyramids was to preserve the mummy of the royal Pharoh for the return of the soul in the infinite hereafter, and also to be the center of a cult of the royal dead, and as a consequence, the dominant element in this vast monumental complex.

The Pyramid of Chephren is the second built of the three at Gizeh, and is only slightly smaller than the Great Pyramid. lt measures 708 feet per side, 470 feet high with side slopes of 52 degrees, Z0 minutes. There is only one burial chamber in the core, but there are two approaches to it from the north: one subterranean and the other through the stonework, that join halfway. Much of the original limestone casing or finish surface is visible at the apex, as are fragments of the base course facings of granite. The remainder of the complex is well preserved also, such as the mortuary chapel and the Sphinx visible in the print.

The Great Sphinx of Chephren is a colossal enigmatic monster carved from a spur of rockleft by the quarry masons that worked on Cheop’s complex. The head is of Chephren wearing the royal headdress, false beard and cobra brow ornament with the body of a recumbent lion. The sculpture measures 240 feet long by 66 feet maximum height, with the face being 13.5 feet across. Voids and deficiencies in the native rock were made good with stonework blended in. Be’ tween the paws is a large granite stele, which records a restoration made by Thothmes IV (1425 BC), of the Eighteenth Dynasty.

The Pyramid of Mykerinos is much smaller than its two predecessors at Gizeh, measuring 356 feet square in plan by Z16 feet high, with the sides sloping at an angle of 51 degrees. Much of the casing of Tura limestone is preserved along with sixteen base courses of granite.