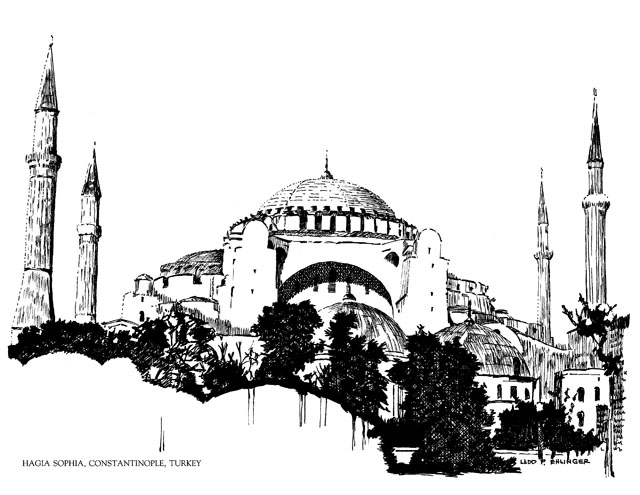 This issue’s signed limited edition print by Ladd Ehlinger is of Hagia Sophia (which means Divine Wisdom), a church in Constantinople (modern Istanbul, ancient Byzantium), Turkey. S. Sophia, as it is commonly called, was first built in 532-37 AD for the Roman Emperor Justinian by the architects Anthemius of Tralles and Isidorus of Miletus and is of Byzantine architectural style. It was built on the site where there had been two successive basilican churches of the same name, erected respectively by Constantine (c. 335) and Theodosius (415). lt was the most important church in Constantinople.

S. Sophia was damaged by an earthquake in the ninth century and repaired, and the minarets (the four towers) along with other outbuildings were added by the Turks after they captured Constantinople in 1453 AD. The Turks converted the building to a mosque. When Turkey was secularized in the 1920’s, Hagia Sophia was converted to a museum and displays even today characteristics of both the Islamic and Eastern Orthodox Christian heritage.

The dome had always been a traditional feature of the architecture of the ancient East, and became the prevailing motif of Byzantine architecture, which was a fusion of the domical construction with the Roman Classical columnar style. As Christianity evolved in the East, the dome became the expression of important theological concepts, most importantly the expression of theUnity and Uneness of God and man’s intimacy with Him. This was quite the opposite of the development of the church in the West, where the basilican plan of the church predominated, with its emphasis on man’s journey or procession in life toward God.

The dome is a perfectly symmetrical shape which exerts a vertical force and thrust upon its support, that is, it exerts a horizontal force upon its support which requires bracing. Byzantine architects were inventive in confecting bracing type supports in the form of pendentives (domical sections melded to a rectangular shape), semidomes and buttresses. These supports would thus tend to match the symmetry of the dome to act efficiently, and when used in a church, would serve to express in physical forms the theological concepts by their centralized shapes the oneness and unity desired.

The curious aspect of S. Sophia is that its main dome was not braced symmetrically. On the east and west, semidomes were used, and on the north and south, buttresses were used. The view in the sketch is from the north, and the semidomes can be seen right and left below the level of the main dome. The nave of S. Sophia is formed of a central square supporting the main dome, with half squares supporting the main dome, with half squares supporting the semidomes east and west, with galleries north and south containing the buttresses and supporting minor domes forming thus a rectangle, which conformed to the classic processional basilican plan, while the overall impression on the interior is that of a space formed by one vast almost (perceptually) assymmetrical dome which fostered movement and procession simultaneously with intimacy.

Hagia Sophia was thus a successful attempt at a synthesis of the two divergent themes of expression of Christianity in are chitecture, procession and intimacy. It was done at an historical time when the government of Rome was a similar crossroad, whether to have an Eastern Empire, a Western Empire, or both, much like the movements within the church itself.

Successor Byzantine Christian churches and mosques used S. Sophia as the model for design to express intimacy, and were symmetrical in plan and three dimensions. Successor Westem Christian churches use ed S. Sophia as the model for domical expression of the basilican processional plan, from the Romanesque period, through Gothic to the Renaissance and the Revival styles as well.