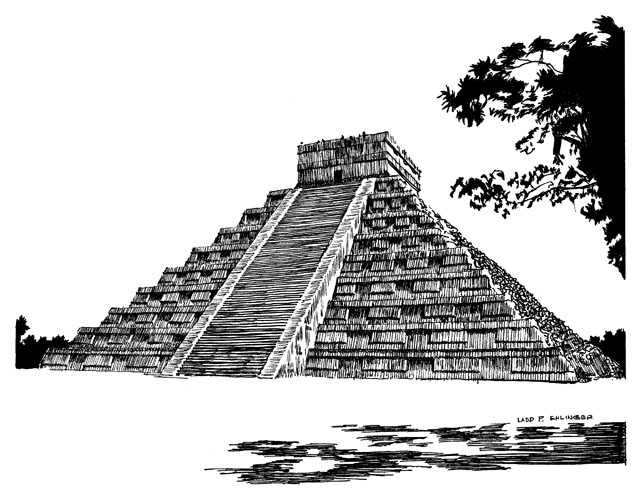 This issue’s signed limited edition print is of The Castillo, a temple pyramid at Chichen Itza’ in Yucatan, Mexico The Itza’s were a toltec tribe that migrated from Tula in central Mexico to the Yucatan peninsula in the late ninth or early tenth century A D They took over the sacred city of Chichen form the Mayas, and blended their culture and its architectural expression with that of the Maya Puuc and Chenes architectural styles.

The union of the architectural style of the newcomer Itza’ (Toltecs) with that of the Maya was such a perfect synthesis that it has leas to much confusion among the experts in dating the various structures at Chichen Itza’. However, it is fairly certain that the Castillo is the first of the merged style buildings built in its entirety by the Itza’s. These buildings mimic those of the previous Itza’ capital at Tula.

The construction of the Castillo dates from the tenth and eleventh centuries A.D. It is a great step pyramid flanked by four staircase bordered by ramps, and surmounted by a perfectly preserved upper temple. The shape of the temple resembles that of a European Castle, hence the name. The structure is radially symmetrical, and the view shown is that of the minor elevation. The two elevations to either side have larger, more prominent openings in the temple facade, and lead to a spacious vaulted inner chamber, while the smaller opening shown merely leads to a dead end corridor, which seems to justify the opening.

The construction of the vaulted inner chamber of the temple is what positively marks the construction as that of the Itzas’ along with the serpent columns, the stepped pyramidal shapes, and the frieze decoration. The vaults built by the Itzas’ were more structural in character than those of the Maya. Neither were arches, but were of the corbeled type. The Castillo vaults have a greater span than those of the earlier Maya buildings. The Itzas’ would also place these same vaults on top of hypostyle halls, (buildings composed of multiple colonnades), something the Maya never did.

Two of the facades of the Castillo have been restored, the other two facades have been left in rubble. In the process of doing so, the archeologists discovered that the Castillo is actually a superimposition over an earlier, smaller pyramid. Superimpositions of this type occurred frequently in the Maya world, and create a problem of choosing which period to restore for the archeologist. Today, it is common to make trial bores to determine whether the building is a superimposition.

Another inner temple was discovered by investigators just under the visible one, left just as the priests had left it after their last ceremony, before the Castillo was superimposed over it. The sanctuary contained a Chac-Mool figure ( as strange reclining figure in a ‘situp position, whose stomach was used as an altar), and behind it the throne of the red jaguar. This stone statue represented a life-size jaguar, and is decorated with 73 pieces of jade inlay, simulating the beast speckled hide. Real animal teeth are set in his threatening, open jaws and his eyes are represented by two jade balls.

Chichen Itza’, along with many other Maya ruins, can be reached from Merida or Cancun in a very short drive. Merida and Cancun make great vacations from the southern U.S. From New Orleans, it is a short flight, about 1-1/2 hours.