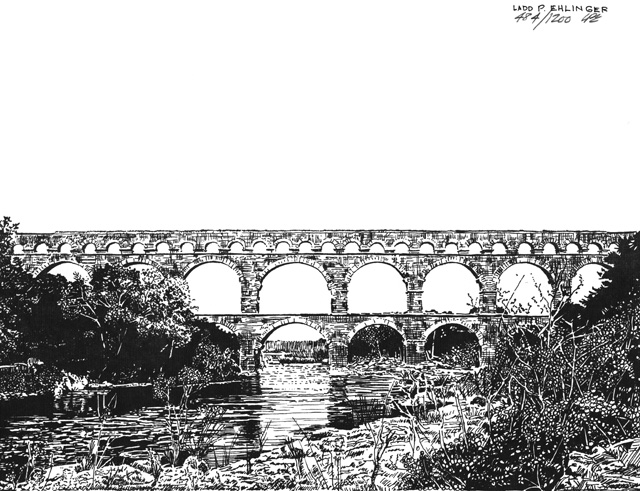 Water played a huge role in the development and expansion of the Roman empire, as large a role as good roads for transportation did. In this issue’s limited edition signed print by Ladd Ehlinger, we have a combination of a road and an aqueduct (conduit for water) that functions as a bridge over the River Gard, near Nimes, France.

Roman civilization placed great value upon the importance of water in both private and public life. Most private houses had bathrooms as we know them today, with tubs, lavatories and toilets, but the water ran constantly to flush the waste away. There were public baths as well, which we as a civilization do not have, where separate pools of cold, tepid and hot water were used for cleansing and relaxing. These pools were huge in size and also utilized constantly running water to flush them and keep them clean. There was no chlorination or other chemical treatment as we know it, so the constant flushing was a necessity along with very large quantities of water. In addition, the Romans had no methodology of treating waste water or sewage, or even storm drainage that became contaminated by animal droppings, even though they were well aware that waste water fostered disease and should thus be separated from potable water.

Consequently, sources of clean, potable water and a means of preventing it from becoming contaminated by any source was absolutely necessary. Waste water was evacuated downstream and fresh water was sought as far upstream as possible. In the sixth century B.C., the Romans began using conduits to evacuate waste water and also to bring in clean water to the city. Mountain streams and springs in unpopulated areas were used as a source of fresh water to minimize the possibility of contamination. Channels, called 'specus’, faced with stone rubble set in mortar were dug into high spots in the terrain and bridges supporting channels were used to span depressions, so that the channels were kept to a slight slope from the source of the water to the city. The water was kept as high as practicable in the air in order to keep the pressure of the water high, and to prevent theft and contamination. The channels that needed to be in the air were supported by tiers of stone or concrete arches for economy of support and minimum obstruction to traffic below.

The Roman architects seldom used pumps, though these had been invented by the hydraulic experts of Alexandria, Egypt centuries earlier, and the Romans were familiar with them. Qne of the few occasions when they used pumps was in the water supply for Lyons, France. Siphons were sometimes used for transsport over deep depressions or ravines also, but when this was done, multiple lead pipes of small diameter (9 or 10 of 1-1/2” diameter) were used in the depression linking the reservoirs on either side of the depression. The Romans were unable to make satisfactory cast iron pipe and valves to withstand the high pressures, so this method with small lead pipes and reservoirs was used. The size of the 'specus’ varied from 1-1/2’ to 4' wide by 2’ to 8’ high, and was constant from the source of the water to the reservoirs that were built near the distribution destination. Some of these distribution reservoirs were huge vaulted caverns built underground, such as at Constantinople, with buildings built on top of them later.

Local distribution was initially sent from the 'specus’ to large pipes made of stone that had holes drilled to create the conduit, brick vaulted channels or terra cotta pipe. From these conduits, distribution into the buildings was by small diameter lead pipes.

Incidentally, medical historians have speculated that a major reason for the demise of the Roman empire was that large segments of the population suffered madness from lead poisoning from the lead in the water distribution conduits being leached into the water. However, the Romans also had the practice of flavoring their wine with a tincture of lead and mercury, which was probably of much greater significance. Also, the wonderful roads that the Romans built, while facilitating the control and management of the empire, allowed the importation of disease to the capital at a very rapid rate. The technology to combat the diseases thus imported didn’t exist. This is very similar to the phenomena of today where we see diseases spread rapidly by air travel.

The Pont du Gard was completed about 20 B.C. It was commissioned by the Emperor Agrippa and was part of a 25 mile long aqueduct designed to carry the waters of a spring near Uzes to Nimes, and to function as a bridge for people and vehicles.

The Pont du Gard has three rows of arches one above the other. The bottom row is the bridge that carries the road and has breakwaters facing upstream. It has six arches in all, with very wide openings - 52 feet to 70 feet by 66 feet high, as it crosses a swift flowing river. The second story is the same height as the first and has double the number of arches - 11 total. The third story breaks the rhythm of the lower stories. It is only 28 feet high and has 35 arches which comprise only half the area of the eleva tion. These top arches play a purely aesthetic part, as the conduit could have been placed directly on the second level or on a wall on the second level. This is the only decorative element of the entire bridge conceded by the architect. It is the only level that has mortar binding the stones together. The two lower stories are constructed of large stone blocks laid dry, with no mortar in the joints. Their treatment is so utilitarian that it has been raised to an aesthetic level. The keystones are elongated for emphasis. The corbelled stones just above the springline of the arches, that were used to support the wooden centering or falsework that the vaults were constructed upon, have been left in place as decoration. The whole composition harmonizes with the landscape in a very skillful way.

The writer was aware of the mortarless stone construction when the Pont du Gard was visited with his son, then 12 years old. It was a very windy day, with bright sun and cloudless sky. We were crossing the bridge, about midway when the drift sway, or lateral deflection of the bridge under the gusty wind loading became very noticeable. Thoughts of the mortarless joints being 'worked’ by the swaying motion over the centuries, so that the joints were enlarged by the grinding action making sand in the joints, which further enlarged the joints, to the point of instability of the whole structure under wind loading contrasted with the realization that the bridge has safely been here for centuries. The thought of 'How much longer can the bridge take this motion?’ was interrupted by two startling sonic BOOMS and then the sight of two French Mirage jets buzzing the bridge.