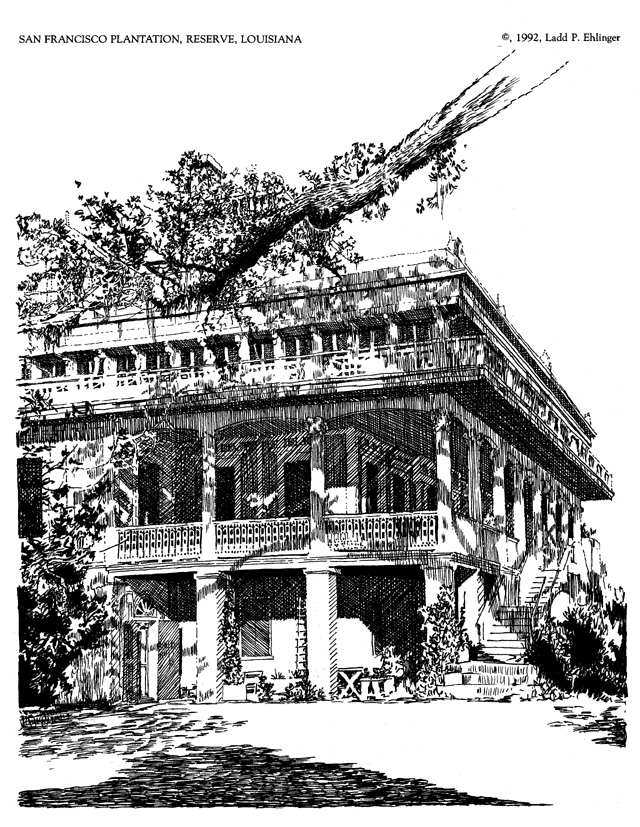 This issue's limited edition signed print by Ladd P. Ehlinger is of San Francisco Plantation in Reserve, Louisiana, about thirty miles from New Orleans up the Mississippi River. There are two similar stories as to how the mansion acquired its name, neither of which involves the city of San Francisco or the actual saint.

The original Owner Builder was a French Louisianian by the name of Valsin Marmillion. The family had accumulated enormous sums of money from the sugar business, both in growing the cane and processing it. Valsin's father had built one of the first sugar mills in St. John the Baptist parish (county), where the house is located. The riches that he had accumulated went into the house, so much so, and so opulent a house it was that be was reputed to have remarked that the house was "Sans Fruscin", which translates into the vernacular as ,'my last red cent' The other version is that Valsin remarked when construction was finished in 1850: "Son saintfrusquin. " ("I have lost my all."). In either case, what he said became anglicized and corrupted into San Francisco, and the meaning is similar in both cases: he spent too much on the house.

Architectural historians disagree as to what the style of San Francisco is. Some have classed it as "Steamboat Gothic", claiming that Valsin Marmillion was inspired by the steamboats that plied the Mississippi River in front of his house. Some have asserted that Marmillion spent a lot of time travelling up and down the river on the Diana, the Reindeer, the Sultana, and the Belle Key, and that his carefree attitude was engendered on these trips that included gaming as well as business, and that he became enamored of the style of these boats, later translating that into his house. Other historians have classed the house as oriental, or Italianate. Ultimately, the house defies classification as it is totally unique.

The design of San Francisco does follow the construction practices of the great houses along the Mississippi though. The ground floor is constructed of brick masonry that is stucco, and originally functioned as the offices and stores of the plantation. It was built in such a way as to survive with little damage in the event the river flooded. The architectural design is simple, plain walls and square brick pillars.

The second level of San Francisco is the main floor containing all of the living areas of the house. The architectural treatment is a little more elaborate to express this function. The walls are briques entre poteaux (brick between posts), where the brick is stuccoed, and the posts are expressed. "Me columns are more decorative, being fluted with Corinthian capitals. The gallery wraps both sides of the house with a decorative cast iron balustrade said to be imported from France. 'Me interiors have decorative columns at the entrances to the parlors and drawing rooms, the walls and ceilings of which were painted by the Italian frescoist, Dominique Canova.

The third level of San Francisco is popularly believed to contain a ballroom. It has a huge cantilevered "deck" that shelters the main floor below, and is surrounded by both a balustrade that does not quite match the one below, and shuttered openings. The writer toured the entire building in 1965 and can attest that the third level is merely an attic, with such huge wooden members articulated in a fashion of not quite a rational structure such that many areas of the space do not provide adequate headroom for anything, much less a ballroom. Somehow though, the whole ensemble goes together, even though nothing on the three levels match.

San Francisco was acquired in the recent past by a major petroleum refining company. The land was utilized to construct the refinery, and the company fully restored the plantation house.