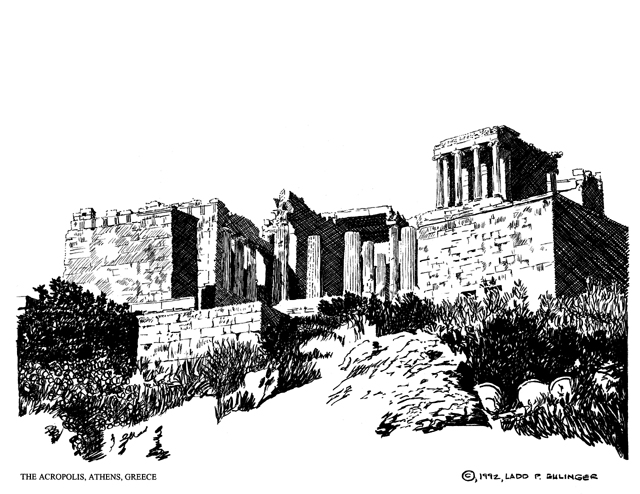 In ancient Greek cities there was usually a place set apart for sacred activities that sometimes also functioned as a citadel. This place was usually located upon the highest ground in the city for dignity and safety and was walled to further enhance these functions. The walls of the Acropolis, as this place was called in the typical Greek city, were in addition to the walls of the city. The shape of the walls was irregular, in conformity to the topography. The Acropolis of Athens is the supreme example of this type of civic architecture.

In this month's limited edition signed print by Ladd P. Ehlinger, the view of the Acropolis is from the west on the plain below, looking slightly north of east. The building which served as the entrance to the Acropolis is called the Propylaea, indicated in the print in the upper center where the exposed columns are in view. The temple in the upper right is dedicated to Nike' Apteros and is in the Ionic style.

The entire Acropolis was designed and built in approximately twenty-five years, with most of the construction taking place between 437 and 432 BC. under the direction of the city leader Pericles under the design of the architect Mnesicles. The main sculptor for most of the buildings was Phidias and other architects, such as Ictinus and Calicrates were involved in the design of other buildings (the Parthenon).