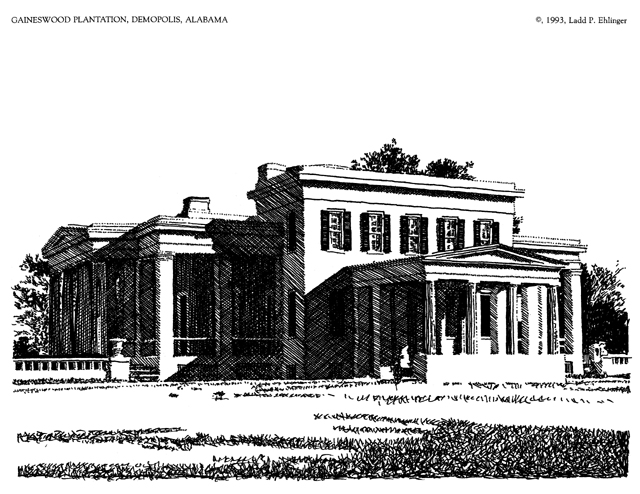 Gaineswood evolved from a two room "dog trot" log house into a major Greek Revival plantation house from 1842 until the Civil War. General Nathan Bryan Whitfield purchased the 1,000 acre cotton plantation from the original owner, Gaines, and acted as Architect of the transformation, even though his education was more engineering in background. General Whitfield was also an inventor and several of his inventions are resident in the house today along with most of the original furnishings.

The labor that built the house was slave labor but the slaves were native American Indians, not African. They were extremely accomplished carpenters and plasterers.

This issue's limited edition signed print by Ladd P. Ehlinger is from the Northwest looking toward the Porte Cochere' Entrance, Reception Rooms and Ballroom, with Bedrooms above.

The house is asymmetrically composed of symmetrical elements, all very artfully assembled on a grand scale. The exterior utilizes Doric style columns and the interior has Ionic style columns throughout except for the Drawing Room that has Corinthian style columns.

The logs of the original house were removed toward the completion of the house, although the "foot print" of the original "dog trot" house remains as part of the floor plan. The plan is non-axial in its overall composition, although the sub-elements are axially composed, rendering a very picturesque quality.

This house is Alabama's finest Greek Revival mansion and is well worth seeing. It is listed on the National Register of Historic Places, and is also a National Historic Landmark. It is now owned and maintained by the State of Alabama.