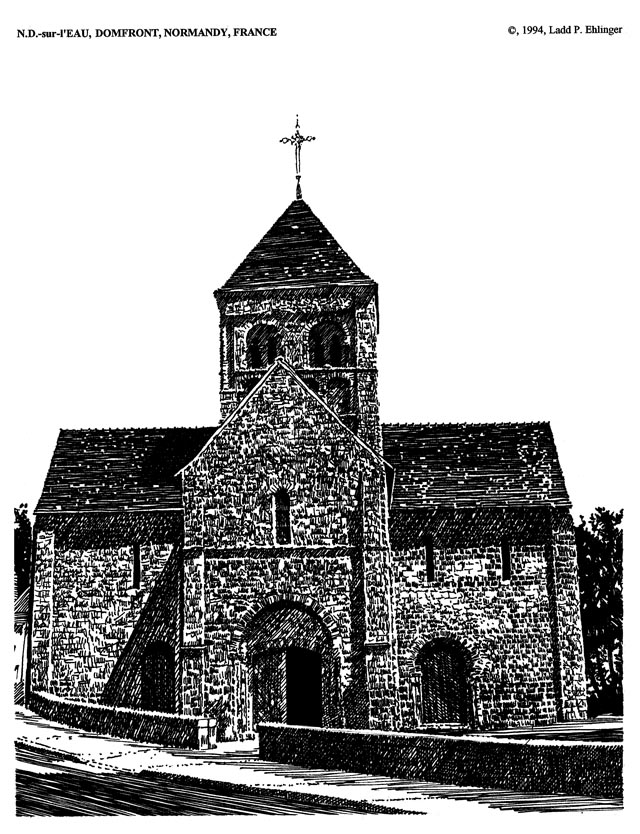 Notre Dame-sur-l‘Eau (Our Lady by the Water) is an early Romanesque style church in the town of Domfront (meaning St. Front or Frontius) in Normandy, France. Domfront is a small town built on a rock crest 200' (70m) above the gorge that commands the Varenne River that ﬂows through the gorge in Lower Normandy. The population of Domfront is only slightly more than 4,000 today. It was always rather small, yet it was one of the earliest towns to build a church after the end of the Dark Ages in the llth century.

Romanesque architecture is the name given to the style of buildings built during this time because the forms and structure are derived from the forms and structure used by the Romans. Large round arches, cylindrical (barrel) vaults, engaged buttresses, and thick walls characterized Romanesque buildings. In addition these buildings were designed and executed with great timidity due to the ignorance and lack of experience of their builders.

The walls of Romanesque style buildings were quite thick, because of the builder's inability to calculate structural strength as well. Caution prevailed. Windows were quite small, especially in comparison with the Gothic period that came later, probably due to fear of weakening the walls and an inability to determine how much light would be admitted. The walls were strengthened by buttresses that were usually expressed on the inside rather than on the outside of the building, from the Roman tradition, and probably also because the builders had a limited understanding of the structural functioning of the buttresses.

The horizontal spanning components were usually barrel vaults that were supported on the side walls. In some instances, the barrel vaults were at right angles to the main axis of the building, each side by side so that each vault braced its neighbor's thrust, and in turn all thrust was transferred to the ends where large buttresses resisted it.

Despite the crudeness of the Romanesque buildings, they were quite expressive of the fervor and power of their builders. Their simplicity and directness rendered great meaning to the observer.