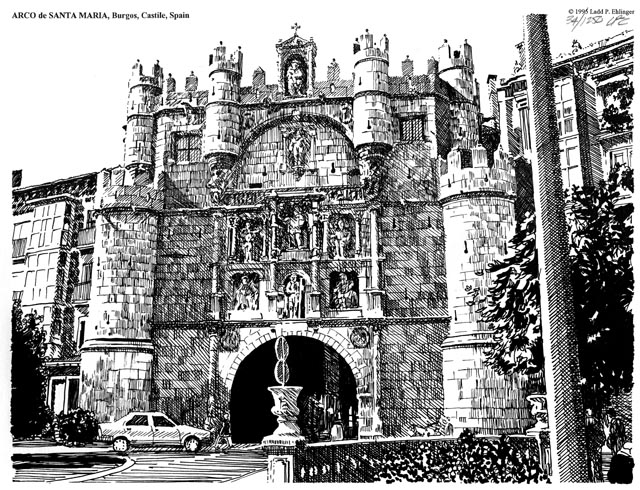 The Santa Maria Arch, the subject of this issue's limited edition signed print by Ladd P. Ehlinger, guards the town and town walls of Burgos. It also defends the bridge named for the same saint in this town of the province of Castile, Spain. This structure is in the Spanish Gothic style and dates from the 14th century. It was modiﬁed in the 16th century, when the statues of famous personages were added in the lower areas.

Diego Porcelos was depicted in the bottom center and ﬂanked by two semi-legendary judges said to have governed Castile in the 10th century. On the top in the center is depicted Count Fernén Gonzales with the Emperor Charles V to the left and El Cid to the right. Diego Porcelos refounded Burgos after it was devastated in the 9th century. Count Fernan Gonzales selected Burgos 50 years later in 951 as capital of the then County of Castile.

El Cid was a mercenary who fought both Moors and Christians with equal fervor, who has been romanticized beyond his real accomplishments and loyalties. I-Iis real name was Rodrigo Diaz, and he was a native of Vivar - a town 6 miles from Burgos. He was a Captain who fought at ﬁrst for Sancho II, the King of Castile, then for Alfonso VI, Sancho's wcceeding brother. Alfonso banished El Cid in response to jealousy of El Cid's prestige, even though Diaz was married to the King's cousin, Ximena. This was when El Cid entered the service of the Moorish King of Saragossa. Later he fought for the Christians, and was defeated by the Moors. He died shortly thereafter.

Burgos is in a shallow river valley at the center of a windswept plateau. In 1492, it became less politically important when it relinquished its position as capital of Valladolid. This released energy into the community for business and artful pursuits. Burgos became very wealthy during this period up until the 16th century when the prevalence of the plague brought the prosperity to an end. The Arch was modiﬁed during this ﬂowering period.