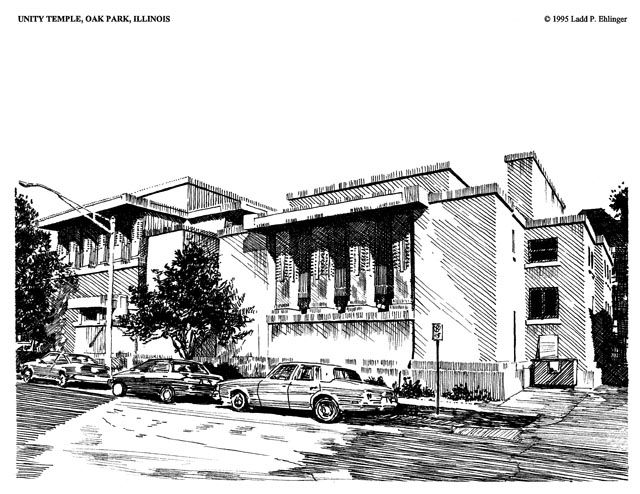 Lao Tse, or Lao-Tzu as some translations interpret the name, was an ancient Chinese poet - philosopher who lived contemporaneously with Confucius. Some say he was a follower of Confucius. He wrote the Tao Te Ching (The Book of the Way) in the 5th century B.C. in which he said:

We join spokes together with a rim to make a wheel, but the essence of rotation lies in the space between the axle and the hub;

We shape clay into a vase, but it is the emptiness inside that holds what we want held;

We hammer wood together for a house, but the reality is the space within,

What is unseen is more important than what is seen.

Frank Lloyd Wright wrote that he was crestfallen to the degree of being severely depressed when he ﬁrst read those words of Lao Tse shortly after he had completed the design and construction of Unity Temple in Oak Park, Illinois in 1906. He had previously thought that he, and he alone, had had the creative genius to have ﬁrst dreamed of such a profound idea, and here he discovered that Lao Tse had done so two and one half millennia earlier. He was not the ﬁrst aﬁer all: he was a "johnny-come-lately" - what a letdown!

Then Wright related that he thought about it some more for a few days, and with his characteristic arrogance and egocentricity, he remarked: "Perhaps Lao Tse was the ﬁrst to think ofthe reality of space, but I, and I alone, was the ﬁrst to consciously design it in a building in the real world!" Wright felt that the Unity Temple was the ﬁrst building he designed where he was fully conscious of the reality of the spatial expression the whole time he designed it, not merely intuiting what he was doing.

This issue's limited edition signed print, by Ladd P. Ehlinger, is of the south facade of Unity Temple. Here we can see the building as two masses connected in the middle by the entry lobby that one can‘t see from the street. The lower mass closest to the viewer is the parish hall, whereas the taller mass is the sanctuary. One approaches the entry lobby from the ﬁont (west) of the building on either side of the sanctuary. Spatially the sanctuary is a cube, being subdivided into two levels of balconies on three sides by massive comer columns ﬂanked by square corner stair towers, all lighted by a huge skylight with the exquisite stained glass of Wrightian artistry. The fourth side is devoted to the minister's pulpit, seats for the elders, and the organ. One enters the sanctuary indirectly from the corners, from below in the dressing and choir areas, but one exits past the minister's pulpit into the lobby.

After exiting into the lobby, one enters a similar spatial expression in the parish hall, where there are classrooms on the second level and a large communal space on the ground level with a kitchen.

This building was one of the ﬁrst buildings built in the U.S. of reinforced concrete. One of the determinants of the shapes used in the building was the reusability of the forms for casting the concrete. The sanctuary and the parish hall were built in quarters to save money. The texture of the concrete was designed to be exposed aggregate aﬁer the forms were stripped ﬁom the cured concrete.

Oak Park is a suburb adjacent to and west of Chicago that was developed from the mid 1880's through 1914 or so. It was suburban sprawl that was made possible by the inter urban railroad - the EL. Wright developed as an architect along with the cotmnunity, having built his home there ﬁrst in the late 1880's and his attached studio after he left Adler & Sul1ivan's employ in the early 1890's. Wright's family were Unitarians, with a long association. This particular church commission came to Wright through his Uncle Lloyd's inﬂuence as a Unitarian Minister.

Oak Park today is a virtual museum of Wright's buildings, and of those of other architects of the Prairie School of Architecture, as it was called at the time. Most all of these buildings, like Unity Temple, have been restored and are in active use. It is well worth a visit when seeing Chicago.