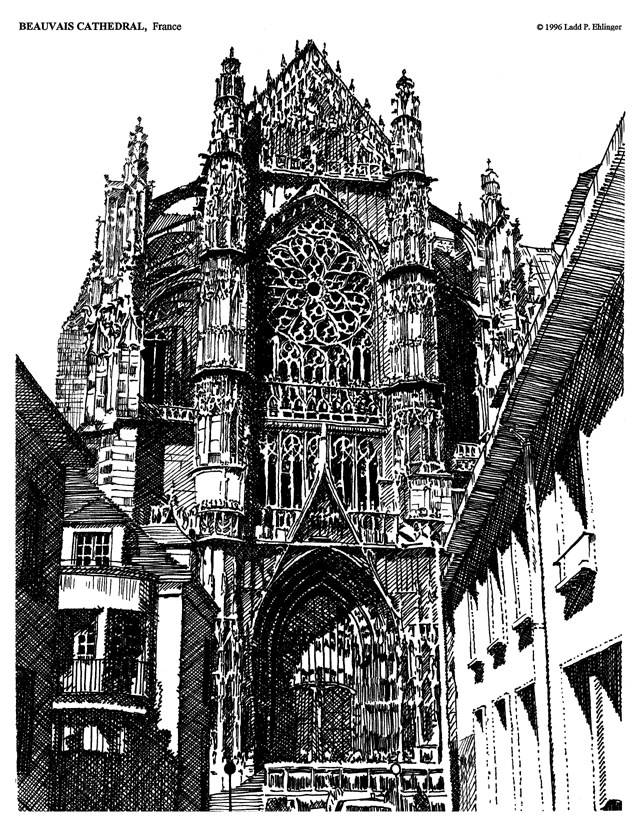 The Cathedral of St. Peter in Beauvais is the remnant of the decision of the Bishop of Beauvais in 1225 to build the biggest and highest cathedral of the age. Its vaults were to exceed 157 feet, 6 inches (48 meters) in height, and approximately 57 feet in span. These are the loftiest in Europe.

Martin Chambiges began the construction of the transepts and crossing after the Hundred Years War. The design of the south transept facade's gable and rose window, the view in the issue's limited edition signed print by Ladd P. Ehlinger, is attributed to Chambiges. This facade is in the Flamboyant Gothic style, by deﬁnition very ornate. It is considered to excel the western ﬁont (main facade) of most Gothic Cathedrals, and the carved wooden doors are considered to be masterpieces of Gothic and Renaissance design and workmanship. Instead of then starting on the nave, Chambiges began to build the crossing tower, an open work spire. It was completed a century later in 1539 and was 36 feet (11 meters) higher than the tower of Strasbourg Cathedral. It too collapsed in 1573, because it had no nave to buttress it on the west.

The structure of Beauvais Cathedral is the’ most daring of any Gothic Cathedral. It is held together by iron tie rods at the spring line of the arches and vaults which are further strengthened by three tiers of ﬂying buttresses to also remove the thrust. The ambition of the designers / builders to build the biggest and highest cathedral far exceeded their empirical and technical knowledge of structural analysis and design. Rational analysis of structures by mathematics did not become a known science or engineering discipline (statics) until the late 18th and early 19th centuries.

The stained glass of Beauvais is of the thirteenth, fourteenth and sixteenth centuries and are considered to be the richest of all Gothic churches. Those in the south transept were created in the Beauvais workshops founded by Ingrand Leprince. The triforium has wonderful hues of green, and the rose window is by Nicolas Leprince. Tapestries are also exhibited in the Cathedral regularly, the tradition having begtm because of the weaving workshops of the 18th century that were prevalent in Beauvais.