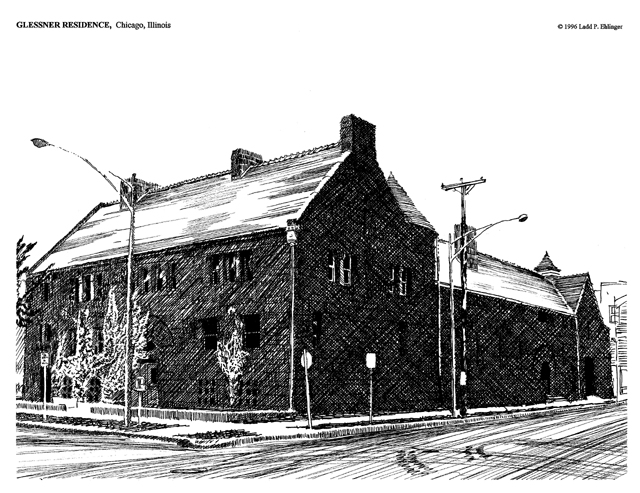 The Glessner Residence in Chicago is the subject of this issue's limited edition signed print by Ladd P. Ehlinger. It is on the south side of downtown and was one of the last commissions executed by Henry Hobson Richardson, the architect. In fact the home was completed after Richardson's death on 27 April 1886 of tonsillitis at the age of 47.

The plan of the Glessner Residence is particularly interesting because Richardson chose to build the house on the lot lines of the corner city lot, and use the remainder of the space on the property as an enclosed private courtyard. The carriageway pierces the front wall (on the left in the sketch) and runs the length of the property to the street in the rear. The stable portion of the house is to the rear (on the right in the sketch) and accesses the street as well as this interior driveway.

Richardson considered the conceptual scheme of this house as affording more privacy while being more imposing than most city dwellings. The scheme allowed the architect to design one of his trademark massive walls right on the street.

Who was Henry Hobson Richardson? Many architectural critics consider him to have been the true founder of an American Architecture - or at least the seeds of what would later become so.

He was born on the Priestly Plantation in St. James Parish just up the Mississippi River from New Orleans on 29 September 183 8. He spent his formative years in New Orleans, going to the public school in Lafayette Square (now downtown), and his summers and winter vacations at the plantation. As a student, he showed great talent and promise in drawing and in mathematics - the perfect blend for an architect. He went to Harvard, graduating in the class of 1859.

There, he made many friends in the Boston area and all along the east coast who would later become his major clients. In 1860, Richardson applied for entrance and was accepted to l'Ecole des Beaux Arts in Paris, the leading school of architecture in the world at that time. He was tested entirely in French for entrance which required a few months of study before he took the exams.

During his studies, the American Civil War erupted. His funds were cut off from America, and he took employment to survive and persist in his studies, rather than abandoning them and going to war in the U.S. Richardson returned to the U.S. in 1865 and sought employment in New York. He soon opened his own ofﬁce with an important commission for a Unitarian Church in Springﬁeld, Massachusetts providing his ﬁrst break in 1866. He took a partner, Charles Gambrill, in 1867. The partnership lasted until Gambrill's death in 1878. Many important projects were done under the partnership, including the famous Trinity Church in Boston.

With the Trinity Church project, Richardson began designing in the Romanesque Revival style. The custom of the time was to design in one "revival" style or the other.

What H. H. Richardson did however, was to reinvent the "style" by transforming it into something entirely new and personal to him. The characteristic semicircular arches became "fattened" and very thick. The walls became massive with edges to the stone that served to emphasize the massiveness. The monumental scale of the buildings and the solid to void relationships acquired a rhythm unknown in anyone else's Romanesque Revival or even in the original Romanesque style of the 6th through the 10th centuries (which was copied from the Roman style(s) of the millennium).

In essence, the style became transformed into "Richardsonian Romanesque" - what we call it today. Richardson inﬂuenced numerous architects with his work, so much so that it provided the foundation for American Architecture.

Louis Sullivan admitted and admired the Richardson inﬂuence. He mimicked the pattern of arches in Richardson's Marshall Field Warehouse in Chicago in his own Auditorium Block Building. Sullivan's pupil, Frank Lloyd Wright used the massive arches in many projects in both his early and later works: the Thomas Residence, the Arthur Heurtly Residence, the Dana Residence, and in the V. C. Monis Gift Shop in San Francisco. The last example copies the Glessner off center entrance through a large arch as shown to the right rear of the sketch. Few Richardson commissions were executed in the south. There is only one in New Grleans. It is located on Lee Circle and presently houses the Pat Taylor energy enterprises. The authorship of this project is disputed, as the design was not ﬁnished by his ofﬁce until aﬁer Richardson's death .