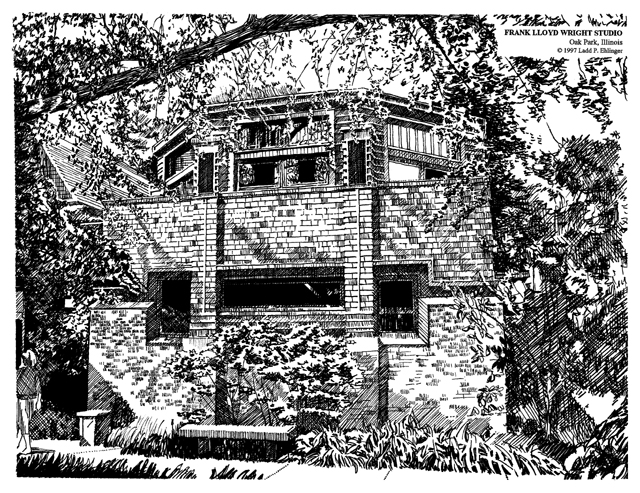 The Frank LLoyd Wright Studio in Oak Park, Illinois was the scene of some of the most productive and creative design work that Mr. Wright did in his whole career.

This month’s limited edition signed print by Ladd P. Ehlinger is a view of the south facade of the drafting room portion from what was originally perceived to be the side yard by the clients that entered the building. The entrance was on Chicago Avenue at the bottom of the plan below, which was actually the side street to this corner lot. Immediately behind and attached to the studio was Wright’s house fronting on Forest Avenue, built earlier when he was the head draftsman at the Adler & Sullivan architectural firm. To the right of Wright’s house was his mother’s house, also on Forest Avenue, the first built in this total complex.

The plan of the studio is articulated with multiple different shapes and spaces.

The drafting room to the left is a square on the first level, with an octagon on the second level and an octagonal opening in the second floor connecting the two levels. The private office and lobby / secretarial area adjoin on the right with a stair to the basement, and a corridor leading to another octagonal shaped space - the conference room. The conference room is actually a story and a half tall with the upper level coves framing the windows also octagons, but rotated 22.5° or a half an octagonal side, with respect to the lower octagon.

Connecting to Wright’s house are the vault for the important documents, and a stair to accommodate level changes between the house and the studio. There are fireplaces in the drafting room, Mr. Wright’s office and the conference room. The construction is masonry on the lower walls to about midway up the first level, with wood shingles from there up. The drafting room roofs are pitched shingle and the entry through Wright’s office are “flat”. The entry has columns in antis (between walls) that are of masonry with some of Wright’s strangest ornament ever at the base and capital. There is a dichotomy to the entry - two doors left and right from the central entrance. All of the interior finishes are plaster wall surfaces with extensive wood trim and wood cabinetry throughout. Fine brickwork surrounds the fireplaces. The entire ensemble is somewhat disjointed and lacks the unity of the projects produced within it. But it is a seminal building, a “workshop” if you will, that Wright devised to test design theories in the flesh. Some of his apprentices relate that he was always redesigning the furniture and fixtures in his office in particular, but also those in the remainder of the studio.

Wright occupied the studio from 1895 to 1914, when he fled the country to Europe with his client’s wife, Mrs. Mamah Cheny. Evidently, the siz children’s proximity and vaunted disruption of his work by coming into the studio to play, his mother’s closeness, and his concentration upon domestic or house design, contributed to a massive mid-life crisis and a wandering eye.

After the divorce, the studio was converted to apartments, which provided some income to Catherine Tobin Wright and the children. Wright moved to Wisconson and built Taliesin, his studio, farm and residence. Wright’s studio and the connecting house are now owned by the National Trust and have been beautifully restored to the pre 1914 era. It is well worth the trip to see them.