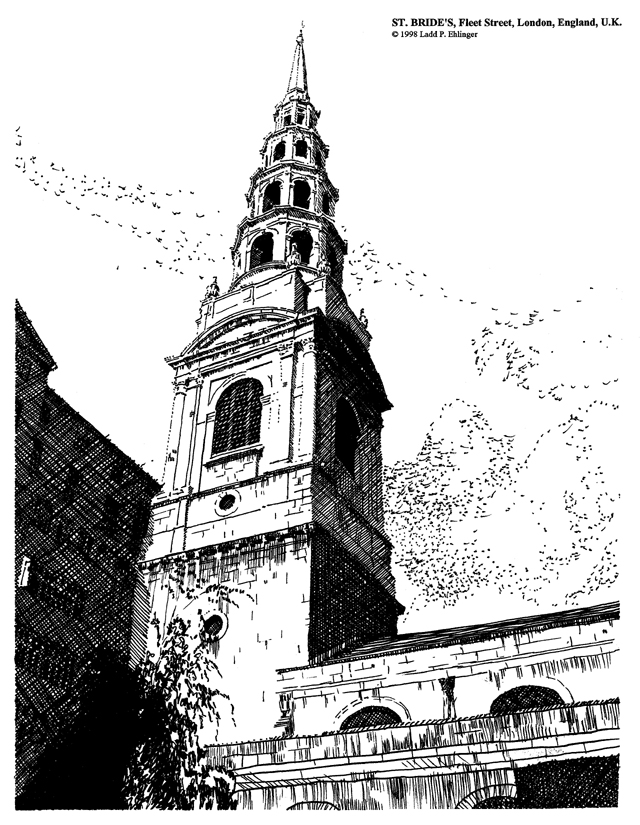 The great Fire of London in 1666 destroyed the whole city except its eastern and northern edges at the time. The populace set about rebuilding their homes first, but it wasn’t long thereafter that attention was given to public buildings including the city’s churches. The king, Charles II, turned to his friend, Sir Christopher Wren, who was an architect, a mathematician, a surveyor, a professor at Oxford, an astronomer, a model maker, and a high churchman. The committee for rebuilding the City churches consisted of Wren, the Bishop of London and the Archbishop of Canterbury.

There were 52 churches that were replaced by Wren and all are paradigms of restraint and simplicity. Of these 52, only 40 are standing today, many of them only retain portions of Wren’s handiwork being victims of Victorian revival movements given into by their parishioners and World War II bombings. The Fleet Street section of London is where all the printing and publishing takes place, which was true at the time that St. Bride’s, this issue’s limited edition signed print by Ladd P. Ehlinger, was rebuilt. At that time the area was commercial and residential, although today few people live

Many London neighborhood churches were in the center of the block, and were accessed by an alley fronting on one of the streets forming the block. The church itself fronted on a courtyard connected to the alley or on the alley itself, thereby leaving more street commercial frontage. St. Bride’s is of this type.

St. Bride’s was executed in the Renaissance style by Wren in white Portland stone. The steeple portion fronts on the alley and contains the entrance and narthex. The steeple tapers upward with a series of octagonal drums which diminish in size to a spirelet, giving a “wedding cake” appearance. The interior was reputed to have been magnificent, but unfortunately was gutted in 1940. The nave is a simple space with large arched windows to match those on the steeple. The central barrel vault over the nave and the cross vaulting over the aisles are as Wren designed them however.