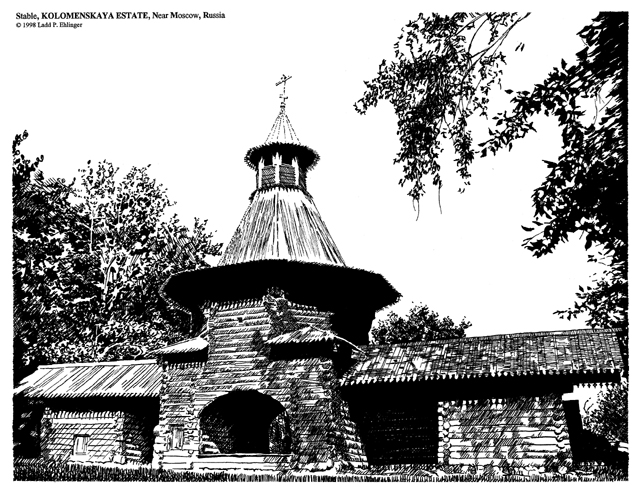 This issue’s limited edition signed print by Ladd P. Ehlinger, is of the stable of the Kolomenskaya (also sometimes spelled ‘Kolomenskoe’ in English) Estate of the Tsars in Russia. The Kolomenskaya Estate is about 20 miles up the Moskva River from Moscow (southeast). This facility was first constructed by Ivan the Terrible as his headquarters or capital when he moved into the north central region of Russia from the steppes, prior to the establishment of Moscow as a city and the capital in the sixteenth century. This area is now a suburb of Moscow.

After Moscow was established as the capital, Ivan kept Kolomenskaya in use as a hunting lodge. It remained active in this capacity under successor Tsars until Catherine the Great abandoned it for being too crude and male dominated. It fell into disrepair until restorations in the 19th

century and recently. This facility has a commanding view of the river from its position on a bluff, and has many surviving buildings in a forest setting, with the masonry Church of the Ascension in a large clearing in the center. This stable building is a wonderful example of the excellent vernacular wooden architecture of Russia. Russia has been blessed with abundant forests and developed a very expressive wooden architecture of both secular and religious buildings. Because of the severe cold of these northern latitudes, termites are not a problem, and fungus rot is a lesser problem than in more southern latitudes.

The form of the stable is unusual in that there is an octagonal drum which supports a tent like conical roof (the shatior) surmounted in turn by a cupola with a curved conical roof, and all supported by the square base with the arch shape opening buttressed each side by the gable roofs cantilevering from each end of their supporting blocks. The roofs do not have shingles, but rather planks installed in a shingled fashion. The Church of the Ascension also has a shatior executed in masonry, rather than a drum and cupola, as do some lesser buildings around the church. This is unusual in Russian architecture - most churches are like St. Basil’s in Red Square with onion domes on drums.

In a strange way, the stable resembles in massing and form some early Prairie Style structures by Frank Lloyd Wright. The name of the architect is unknown. The date of this stable is unknown, but judging from the decorative elements (the scrolled ends of the roof planks that resemble the tops of pickets on wood picket fences), it probably was built or at least rehabilitated in the late 18th century or early 19th century.