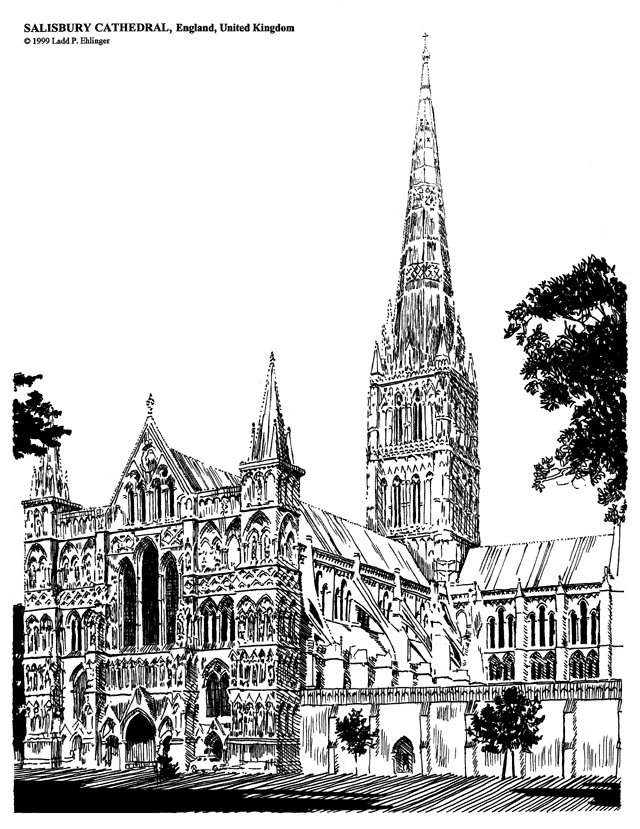 This issue's limited edition signed print by Ladd P. Ehlinger is of the west front of Salisbury Cathedral. Salisbury is unique in many ways: it was completed in a short period of time, all in the same style; it is one of a handful of cathedrals that has a close (rhymes with dose), which is a large park-like setting surrounding the cathedral that is walled off from the town; and it has the largest (404' tall) and most magnificent crossing tower and spire.

Salisbury is about 70 miles west southwest of London, and has been occupied since Roman times. Originally the town was called Old Sarum and was built as a fortified type of town by the Romans upon a hill that overlooked the entire valley of the Avon River. The name was changed, and the town was moved about two miles closer to the river. This occurred when lightning struck and destroyed the second cathedral built by the Normans on the top of the hill of Old Sarum. There was little reason to continue the fortified town as the countryside was secure and the winds were bitterly cold at the top of the hill. Also, it was more convenient to be closer to a source of water. So the town was moved slightly.

Salisbury was built in its entirety between 1220 and 1265, except for the spire over the main crossing tower which was added in the 16th century. It remarkably matches the earlier Early English Gothic style and ambiance of the main composition, however. The silver-gray limestone to construct the walls was quarried at Chilmark, about 12 miles away. The columns are of Purbeck marble.

The close with its large space about the entire complex separates it from the world outside and affords wonderful views of every facade, but especially of the west and north. There was at one time a detached bell tower that was northwest of the west front. There were other subsidiary chapels that were attached to the choir, a delicate north porch front, and a Chapter House. Over the years Salisbury has been "restored" numerous times, sometimes to its detriment as many of these features were demolished along with some important interior features, such as the choir screen. Actually, the replacement choir screen was itself replaced in Victorian times with a wrought iron screen that is very light and airy and enhances the view of the entire nave.

The plan of Salisbury Cathedral is typically English with a squared off east end, unlike the rounded apsidal chevets of the French cathedrals and contains many monastic elements such as the Cloister and Chapter House. The plan of the nave is of an archiepiscopal cross where there are two horizontal bars or transepts. The secondary transept is referred to as the east transept. The tower is over the main transept. The tower is of such weight and creates so much thrust (horizontal force) that there have been structural problems. The corner supports have been altered to accommodated the extra weight, iron banding (visible in the sketch) and chains were added to relieve the thrust. Still there is significant differential settlement and distortion of the supports at the tower that remains to this day.

Sir Christopher Wren was so impressed with the iron work when he was commissioned to survey the building in 1669 (though he hated iron in buildings), that he in turn added additional chains recommending that they be fabricated by smiths that did iron work (anchors and chains) for ships as they were the most competent iron workers.