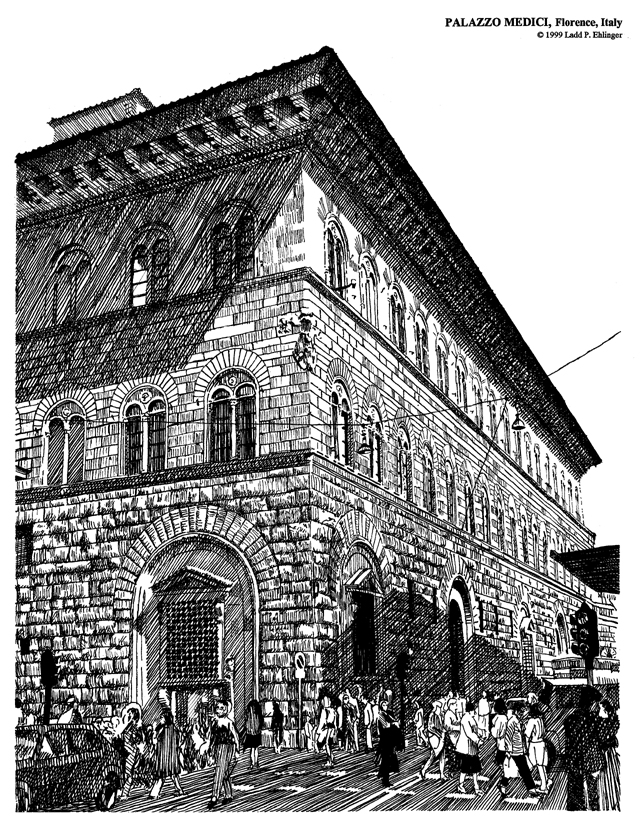 The Palazzo Medici was one of the first Renaissance palaces in Florence to reflect the new style based upon classical forms and order. It was originally built for Cosimo dé Medici, the 'merchant prince' who dominated Florentine politics and economy for decades after returning with his family from a one year exile to Venice. The economy of Florence was so devastated by the flight of Medici capital and other merchant's capital that left with Cosimo and his family, that he was forgiven by the city and invited back.

When Cosimo returned in 1434, he was a wiser and more prudent man in his exercise of both political and economic power, preferring to bankrupt enemies with excessive taxation rather than physically abusing them or murdering them. He was a ruler in the background who kept the society on an even keel, always maintaining the peace so that prosperity abounded. His son and grandson who followed him (Lorenzo the Magnificent) continued his policies of peace and prosperity.

Consequently there was a great flowering of the arts in Florence, particularly in architecture because of plentiful financial resources available. Many palaces were built by the ruling merchant class. The Strozzi, the Rucellai, the Pitti, the Guadagni, the Quaritesi are just a few of these palaces. All of them were in the new Renaissance style.

One story of Cosimo is very instructive: he was a close personal friend of Brunelleschi, a famous architect at that time (who built the dome of San Spirito, the Florentine Cathedral), and he asked Brunelleschi to design him a palace. The design Brunelleschi produced was reputed to be magnificent as the architect had no other opportunity to design a palace and thus lavished his attention and skills on the project. When Cosimo first saw the elaborate model of the palace that Brunelleschi produced, he remarked that "envy is a plant one should never water". Brunelleschi was so enraged that he destroyed the model. Cosimo then employed Michelozzi as architect for his palace.

Michelozzi did not have the talent that Brunelleschi had, and in many instances copied Brunelleschi. However, on Cosimo's palace, he did design a magnificent structure, and appears to only have copied Brunelleschi's Foundling Hospital facade in the Cortile (courtyard) facade. The original palace was two thirds the size in plan of what you now see, having ten windows across the main facade from the street corner. It was enlarged when it was sold to the Riccardi family in 1659.

The organization of the building conformed to the new Renaissance theories of architecture. The ground floor was for family offices, shops, etc. -- functions having to do with the public. The main floor, the piano nobile, was on the second level. This was the living area for the family, while the third level was composed of private bedrooms and sitting areas. All were arranged around the central Cortile for light and air.

The facade expressed this organization by its horizontal emphasis at each floor level, and by the rustication of the stone on each level's walls. The roughest, most heavily rusticated wall surface is on the first level, the next level not quite so much, and the top level wall surface is quite smooth. The arches are somewhat crescent or horseshoe shaped where the circles that comprise the inner and outer boundaries are not concentric or parallel. This motif is peculiar to Florentine buildings and its origin is unknown. The entire structure is capped off with a large overhanging cornice, the size of which conformed to mathematical proportion theories at the time, which is intended to shade the walls and emphasize the play of light and shade.