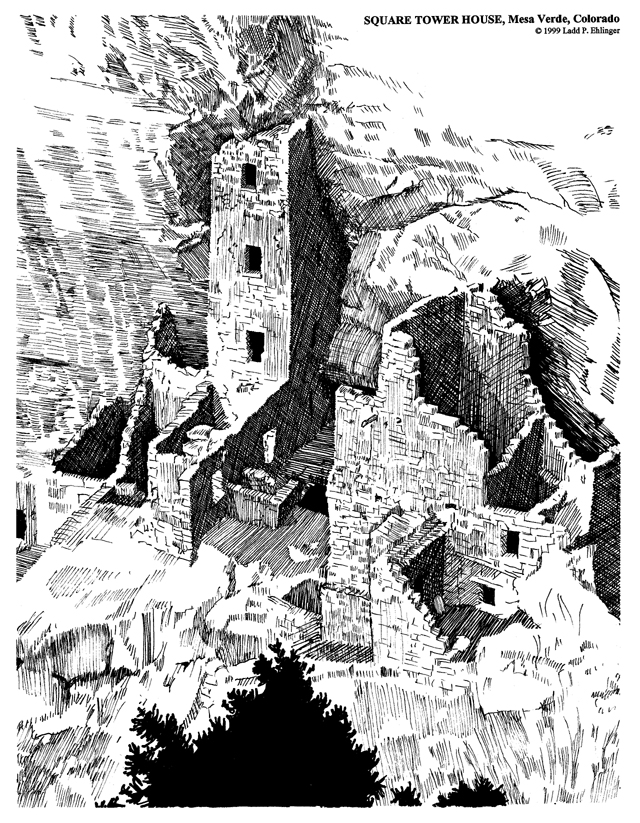 Square Tower House is the name of the cliff dwelling pueblo that is built in an upper alcove of the sides of Navajo Canyon which defines one side of Chapin Mesa, one of the major mesas at Mesa Verde (Spanish for "Green Table"). The name is derived from the 86 foot tall striking tower structure shown in the left center of this issue's limited edition print by Ladd P. Ehlinger. The tower is built and braced against the rear wall of the alcove (produced by erosion of the cliff side), and had doorways, windows, and flooring, with the inner walls plastered. Only about 60 of the original 80 rooms of Square Tower House remain. A spring below the alcove provided water to inhabitants. Many other pueblos did not have a spring or other obvious source of water, and may have collected snowfall and rainfall. Access was by ladder and hand and toe holes chipped into the cliff walls. This pueblo was occupied at the end of habitation of Mesa Verde between A.D. 1200 - 1300.

The peoples who lived at Mesa Verde are a mystery, and have been dubbed by the present day American Indians as "Anasazi" - the ancient ones. We know that they migrated to this area sometime around A.D. 600 and left sometime around A.D. 1300, probably due to a long and severe drought. The climate here is classified as semi-arid or Steppe type, with a limited water supply, and unreliable rainfall. The average annual precipitation is 14 to 18 inches, with most in the form of snow. In good years, this Steppe type climate has a long growing season, moderately warm summers for crop growth, reasonably dependable summer rains, not too cold in winter, adequate winter precipitation, suitable soils for crops, and springs. The mesas gently slope from a high of about 8,500 feet in the north to about 6000 feet in the south. The fertile soil is on the top of the mesas. The rainfall and snow melt has eroded the dry creeks over the eons into deep canyons, the steep sides and bottoms of which are not arable. On the tops piñon and juniper forest are the dominant native flora along with some oak and various types of brush, while in the canyons very little grows due to the lack of soil. The tops were an ideal place for cultivating corn, beans and peppers, the mainstay of the Anasazi diet.

It is very difficult to understand why the Anasazi built these pueblos where they built them until one actually sees and experiences the environment. The tops of the mesas have strong prevailing winds with little shelter, other than in the canyons. Temperatures are hotter in the canyons in the summer and colder in the winter. When one is below the mesa top in the alcoves, one is shielded from the wind, and if facing south, warmed by the sun. So climate may have been a major reason, but there are some pueblos that don't face in the proper direction and are always cold. Also, the porosity of the soil was such that many of the pueblos had springs or even running creeks nearby, but there were some that archaeologists are fairly sure had no natural source of water. There are some who believe that defense was the major reason for building in the alcoves, although there are some pueblos that have fairly easy access while others are very difficult. We will probably never know for sure, but the writer subscribes to the climate theory after having walked the ground.