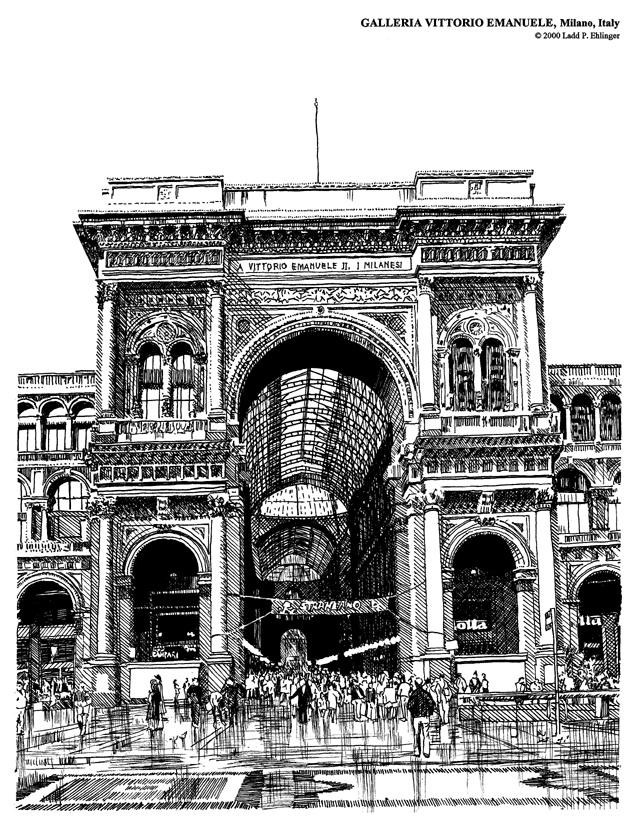 Galleria Vittorio Emanuele II in Milan, this issue's limited edition signed print by Ladd P. Ehlinger, is a paradigm of architecture for retail use. It was started in 1829, the same time the similar Galerie d'Orleans (now destroyed) in Paris was begun, and finished in 1877. The architect was G. Mengoni.

The Galleria is also an excellent example of an iron and glass barrel vault structure in an arcade. The most spectacular, pure example of cast iron and glass (as a greenhouse) was the Crystal Palace by Joseph Paxton, an exhibition building in Hyde Park in London for the Great Exhibition of 1851. The Crystal Palace has been torn down, but you can still shop at Galleria Vittorio Emanuele II today.

The plan of the Galleria is cruciform with an octagonal iron and glass dome at the crossing, and with all of the main entrances at the ends of the arms of the cross. One of these entrances fronts on the main square of Milan. All of the facades are of masonry in the Baroque style, three stories tall with huge pilasters spanning two of the three stories supporting the ribs of the iron and glass roof structure over the arcades. The peaks of the barrel vaults have operable sashes for ventilation and the entrances were left open for the same reason. The retail shops all have show windows on the exterior and on the interior under the vaults.

Galleria Vittorio Emanuele II is a lively place even today, filled with throngs of shoppers. There is something to look at on a very frequent basis within each arcade, and one is out of the weather when shopping. Today's shopping malls are an evolutionary development from the Galleria.