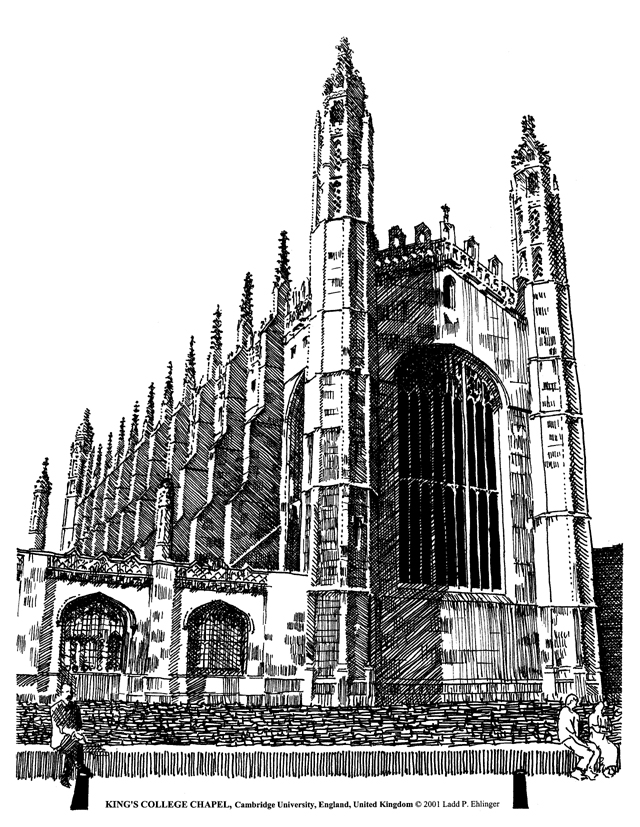 This issue's limited edition print by Ladd P. Ehlinger is of King's College Chapel at Cambridge University in England. This chapel was begun by young King Henry VI in 1441 who was inspired to attempt to surpass La Sainte Chapelle in Paris, the private chapel of the French royal palace built in 1243-48. The original design called for a great forecourt enclosed by arched promenades and buildings with a bell tower on axis with the Chapel west of the main entry toward the River Cam. The only part built however, was the Chapel.

In many ways, King's College Chapel is similar to Sainte Chapelle: the nave is a simple space without side aisles dominated by large windows that fill the entire wall area between buttresses. The buttresses are not the "flying" type as a result.

Even so, King's College Chapel took a long time to build. It was built in three phases, the first ending in 1462 (Henry VI was murdered in 1471 in the Tower of London), 1477-84 (by Richard III), and 1508-15 (by Henry VIII). The first two phases are noticeable by the change in the color of the type of stone comprising the construction (from white magnesian limestone to buff colored oolitic limestone). The third phase is reflected most strongly on the interior by the decorative motifs introduced by Henry VIII that changed the simplicity demanded by Henry VI: portcullises, Tudor roses and the like, along with the elaborate wood Organ Screen which almost dominates the center of the church. However, the Chapel was finished off by the great, elaborate, breathtaking fan vaults executed by the master mason, John Wastell, who discarded the lierne vaults that were originally planned for. These vaults truly crown this building making it a masterpiece of English Medieval Architecture.

The King's College Chapel measures 289 feet long by 40 feet in span between piers, and the vaults are 80 feet high. The fan vaulting was completed in three years between 1512 and 1515. The stained glass windows took about another 30 years to complete. Beneath the Great East Window is the Adoration of the Magi painted by Rubens in 1634 for the Convent of the White Nuns in Louvain, Belgium, and given to the College in 1961. Along the sides between the buttresses are a series of chapels dedicated to various saints.