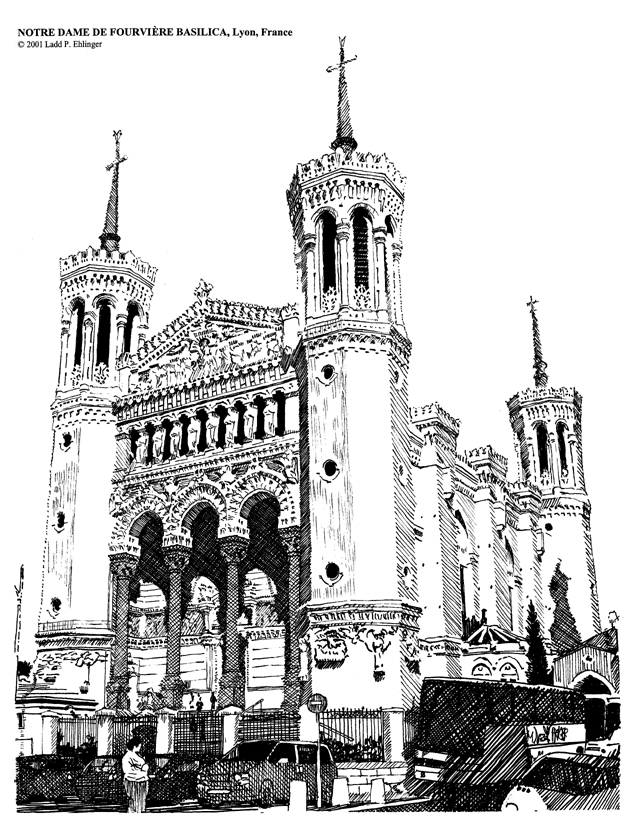 Notre Dame de Fourvière, this issue's limited edition print by Ladd P. Ehlinger, is the Basilica of the city of Lyon in central France. Fourvière is said to derive from the Latin "Forum vetus" which relates to the forum that was the heart of the Roman colony named Lugdunum established here in 43 BC after Julius Caesar conquered all of Gaul. Forums were where all of the important civic, legal and religious buildings were located along with the major commercial buildings by the Romans when they built a city. This Forum was where the esplanade is in front of the Basilica on the tallest hill of the city. It lasted until AD 840 when it is said to have collapsed, probably from an earthquake. The Roman theater, Odeon and aqueducts survived and have been recently restored to the degree that they are stabilized against further decay.

This Basilica is a famous place of pilgrimage, designed by architects Bossan and Perrin. The design was commissioned by the Monsignor de Genouihac, the Archbishop of Lyon, in fulfilment of his vow to build a church here if the enemy did not sack the city in the Franco Prussian War in 1870. The church is the dominant element in a complex that also includes a large Chapel to the Virgin situated to the right of the Basilica on axis with the central towers seen on the right side of the nave. There is a complete duplicate church in the basement of the Basilica, which is artfully handled because one is not aware it exists from the exterior. Yet it has extraordinary light and entrances that match the main Basilica.

The Basilica is an almost bizarre blend of medieval military architecture with Byzantine forms and motifs. The four octagonal towers, with their crenelations on their tops and machicolations that corbel them outward from the shafts, provide sharp visual terminuses to the corners of the building, while the Byzantine arches, both large and small, along with the surface textures and decorative motifs, almost "dance" between these limits. At the rear or east facade, there is an apsidal end which envelops the altars on both levels and is mostly glazed so that it is a lighted beacon on the top of the hill for the entire present day city below. The interior is fully Byzantine with three gilded domes decorated with mosaics, and framed over decorative columns and arches. Statues commemorating the Virgin and other saints abound throughout and there is a stone slab embedded in the floor recalling the visit of Pope John Paul in 1986.

Lyon is an extraordinary city situated at the confluence of the Rhône and Saône Rivers. It is a strategic location geographically as well, functioning as a cross-roads for all points of the compass. Because of its age and continued occupation by man for 2,000 years, there are many interesting things to see. Historically, it was a center for fabric manufacturing. Today, it is an important manufacturing center in metalworking and mechanical engineering with foundries, vehicle assembly plants, electrical goods and petro-chemicals. It is well worth the trip.