Shadows on the Teche 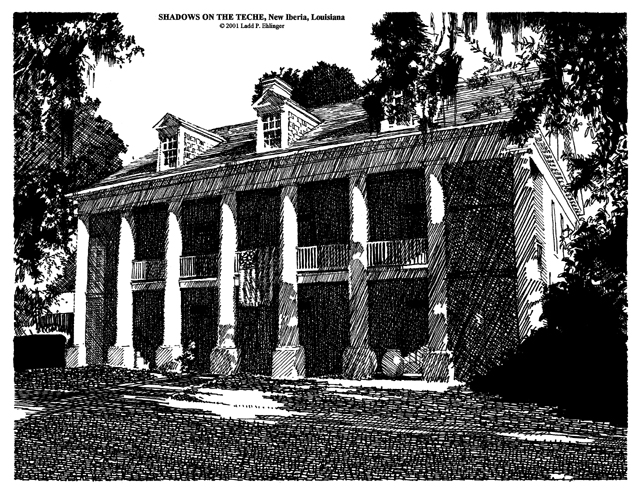 This issue's limited edition print of Shadows on the Teche by Ladd P. Ehlinger, is of one of the most unique and architecturally powerful of all of the Louisiana plantation homes. This home was begun by David Weeks, an American planter, in 1831 and completed in 1835. It was built on a small plantation, most of which was on the opposite bank of Bayou Teche and has been sold off. The house now is within the town limits of New Iberia. It is now owned and has been restored by the National Trust for Historic Preservation and is well worth seeing. The National Trust acquired the Shadows from Weeks Hall, a descendent of the original builder in the early 1960's.

David Week's father was an English immigrant who received his first Spanish land grant in 1792. He operated several plantations in southern Louisiana, the most notable of which was on Week's Island. Week's Island is one of several salt domes which arise out of the Louisiana coastal marsh as huge hills of thousands of acres of dry land with unique local environments. The domes are all in a row geologically and were created by the overburden of silt from the Mississippi River squeezing up the strata below. The most famous of the domes is Avery Island, where Tabasco was invented and is still manufactured today. Jefferson Island is another salt dome of some notoriety also. This one contained an underground salt mine that was punctured during directional drilling by a Texaco drilling rig operating in a nearby lake, draining the lake and flooding the mine within a few hours in the early 1980's.

The ground floor consisted of a Servants Room, Work Shop, Drawing Room, Dining Room and Kitchen with an exterior Loggia, which has three well proportioned arches that support a second floor porch above that overlooks Bayou Teche. The second floor also contained a Studio, two Bedrooms and a bath.

The Shadows' grounds contain numerous live oaks and other indigenous trees draped with lots of Spanish moss that create the shadows that engendered the name. The gardens have been restored also.