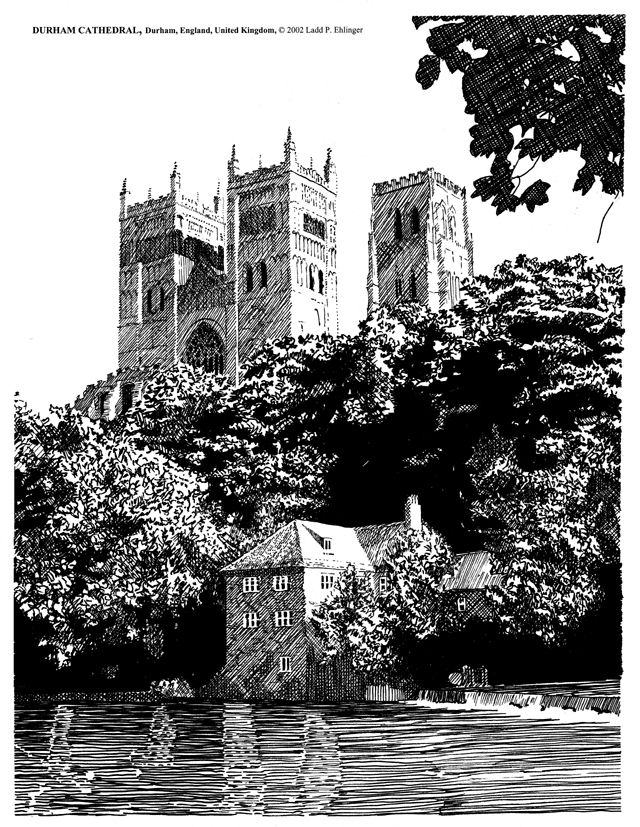 Durham Cathedral, this issue's limited edition print by Ladd P. Ehlinger, is an excellent example of Norman Gothic architecture that is remarkably unified and coherent due to its short initial period of construction: 1095 to 1133. It has been added to many times since, but the power of the original schema of the building is so strong that its unity remains inviolate. This cathedral was prescient in the Gothic period in its ribbed vaulting, columnar and bay rhythms, and use of flying buttresses, although they are concealed in the aisle attics. Durham Cathedral was originally a Benedictine institution, one of thirteen cathedrals of the monastic foundation that were served by regular clergy or monks. These cathedrals were reconstituted at the Dissolution of the Monasteries ordered by Henry VIII as chapters of secular canons. When this change took place, the abbot became the bishop, the prior the dean, and the monks became canons and choristers, while the other personnel remained the same.

The Palace Green is immediately to the north, a huge space bounded on the east and west by university buildings and on the south by the cathedral. Here one can see the entire cathedral at a glance, although photographs are difficult because of the position of the sun. The forecourt of the west facade is so small that no photographs are possible -- one has to go across the river to view the west front and the crossing tower as shown in the sketch. The usual entrance for the town folk is the northwest portal where there is a famous Sanctuary Knocker, an embellished lion's head.

An early English addition to the cathedral is the Chapel of the Nine Altars. It has a sunken floor to gain as much height as possible to emphasize the tall lancet windows, a new emphasis on lightness and verticality. The monastic buildings that surround the south side are also worth seeing, particularly the Refectory and the Dormitory.