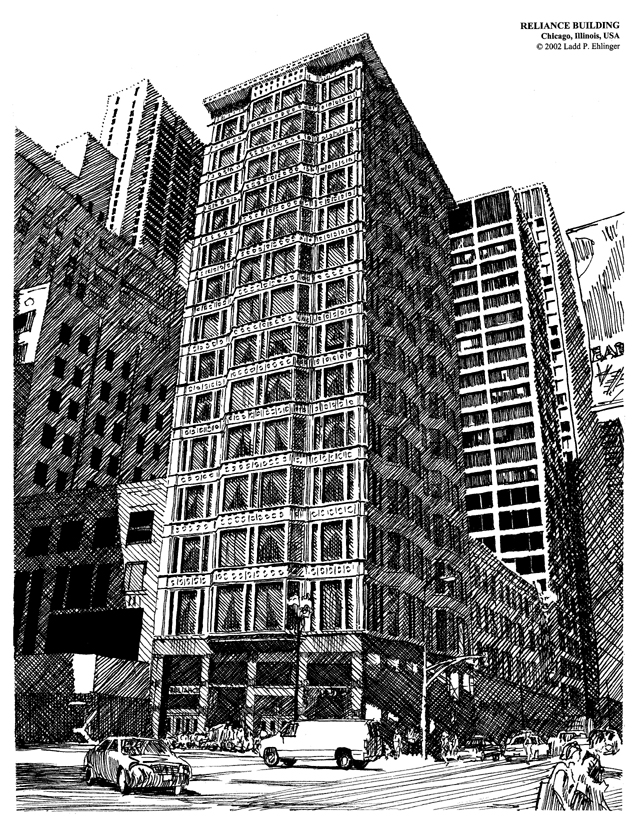 The Reliance Building on State Street corner Washington in the Loop of downtown Chicago is this issue’s limited edition print of a sketch by Ladd P. Ehlinger. It was designed by Burnham & Root as a four story building originally in 1890, and extended to its present height in 1894. When the Reliance Building was designed, Chicago was in the midst of an architectural and structural revolution of sorts because of the advent of structural steel as a material in construction a few years earlier, and the recent technological advances that allowed large glass panels to be manufactured. These were the years and the location of the birth of the skyscraper as a building type and as an aesthetic expression native to America.

This building is one of the first pure expressions of a “curtain wall” skyscraper. Here the structure is a steel frame and the exterior cladding of the building is glass and creamy white terra cotta, hung like a curtain from the frame, rather than supporting any of the building. The glass area was maximized, and it and the terra cotta cladding were designed to express the steel frame geometry on the exterior. The terra cotta and other masonry were used to fireproof the steel frame also. The windows of the building are maximized to admit the greatest amount of light possible. The sills are only 2' off the floor. The window patterns are variations on the “Chicago window” (two narrow operable sash windows on the sides of a center large fixed piece of glass). You can see the “Chicago windows” on the corners of the Reliance Building. The central bay window has adjoining “Chicago windows” sharing the operable sash in the center.

The buildings to the rear of the Reliance Building are of more recent vintage, but their heritage can be traced to the Reliance Building. The structural frame is expressed. The windows are in groups of three, and the walls are non load carrying. The Burnham & Root firm was at the forefront of technological development in the Chicago scene at the time. Daniel Burnham was one of the initiators of the steel frame technology in many other Chicago skyscrapers, and a visionary in many other areas as well. He was instrumental in planning the parks along the lakefront in Chicago that were the residual benefit of the Colombian Exposition of 1893 that he also headed up. His motto was: “Make no little plans!”. Burnham’s partner, John Root, was the designer of the Monadnock Building, the last and tallest structural masonry building built in Chicago, and the Rookery. He also was designed the first Reliance Building, but died at age 41 in 1891. The firm name reverted to D. H. Burnham & Company. The rebuilding design credit is given to Charles B. Atwood, of the D. H. Burnham & Company firm, but many elements of Root’s design were retained. Originally the Reliance Building was leased to doctors and dentists, other professionals, and craftsmen such as dental technicians that liked the large amount of light available. It has been recently restored and converted in 1999 into a 122 room hotel appropriately named “Hotel Burnham”. The restoration is well done, the room rates are reasonable, and the location is right in the middle of all of the downtown action. It is well worth a stay.