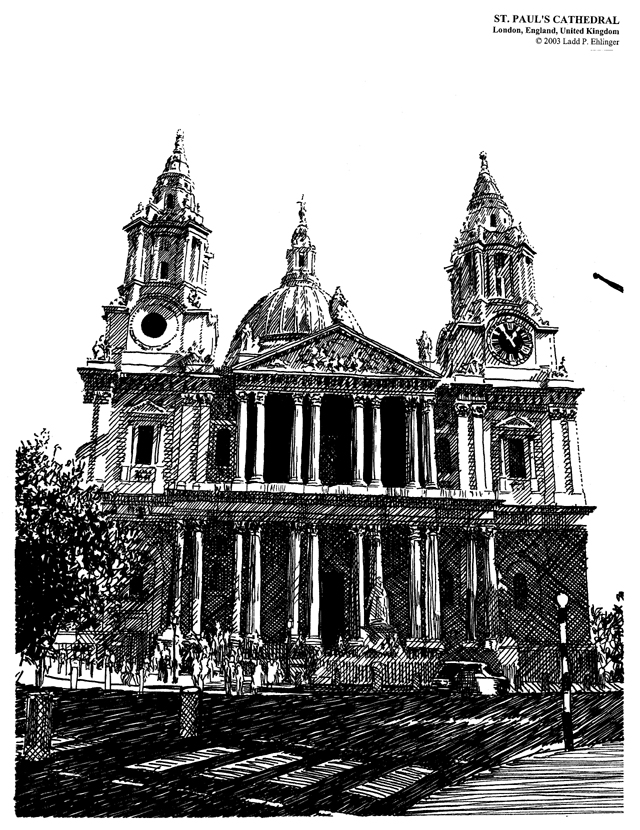 This issue’s limited edition print of the sketch by Ladd Ehlinger is of St. Paul’s Cathedral in London (1675-1710). It is the masterpiece of the architect Sir Christopher Wren. It replaced a medieval cathedral that occupied the same site that was destroyed in the Great Fire of London.

The view in the sketch is of the west front - main entrance, approached by a broad flight of steps which gives a grand scale to the building. It has a central two storied portico of Corinthian and Composite columns superimposed, with a pediment containing a sculpture of the conversion of St. Paul. The portico is flanked by two campanile, the north one contains the bells and the south one the clocks, one facing west and one facing south. Above all is visible the dome, one of the finest in the world.

Actually, the dome is really three domes (see the section): a very tall one on the exterior that is tall enough so that one can see it even when close to the building even though it is diminished by perspective as in the sketch (formed of timber and roofed with lead); a much shorter one of brick covered with plaster so that one can more comfortably see the dome when in the interior without getting too much neck strain; and the third one which is conical in shape and built of brick that holds up or stiffens the other two. All domes have thrust - that is, they tend to push out or spread at the base. These domes are constrained by a huge iron chains and iron bands which wrap around their common base and at multiple points vertically. The U. S. Capitol building has a similar dome construction.

There is a “Whispering Gallery” (so called because a whisper is easily heard on the opposite side due to the acoustics of circular spaces) at the base of the columnar drum that the domes are supported by. This gallery is 99' above the nave of the floor and reached by various circular stairways which the writer traversed. Many people don’t make it to the gallery. The view from the Whispering Gallery is spectacular, as are the views from the porches that are adjacent on the exterior to the roofs of the Cathedral and all of London.

The view of the St. Paul’s roof reveals that there are flying buttresses to resist the nave vault thrust concealed from exterior view by the outer walls’ perimeter pediment / screen wall. The inner “bones” of this church’s structure are no different from those of a Gothic cathedral, and the screen wall serves as additional weight on top of the flying buttresses to stabilize them structurally. There are also clerestory windows which light the aisles at the triforium level, and saucer domes over the aisles, both concealed by this same perimeter pediment / screen wall. They are concealed to maintain the Renaissance motif style on the exterior.

The plan of St. Paul’s is a Latin cross which has a long nave. This was designed by Wren in deference to the clergy’s desire for the long nave for ritual processions. Wren’s first design was a Greek cross in plan (all legs are equal) which is aesthetically purer, but it didn’t satisfy the clergy.

St. Paul’s is also the burial place of many notables: Lord Admiral Nelson, the Duke of Wellington, and Wren himself. The graves are in the crypt, and are surmounted by sculptures of their occupants. The crypt mimics in plan the church above, but with very thick walls to support all of the weight above.