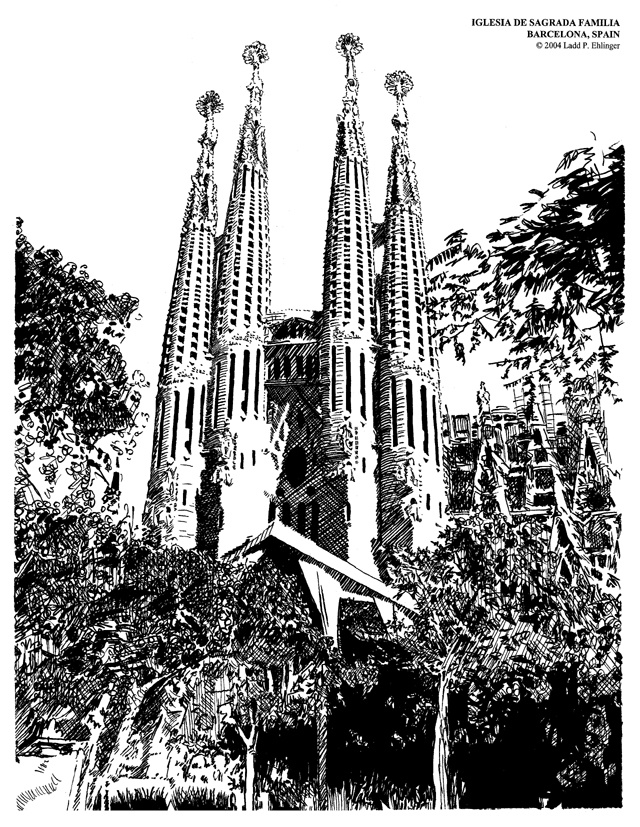 This issue’s limited edition signed print by Ladd P. Ehlinger is of the south transept of Iglesia de Sagrada Família (Church of the Holy Family) in Barcelona, Spain. This church is locally called a “Temple” so as to differentiate it both from the Cathedral and an ordinary church. Iglesia de Sagrada Família was primarily designed by Antoni Gaudí i Cornet, a Catalan Architect.

Antoni Gaudí was born 25 June 1852 in Reus, a fair sized provincial town west of Tarragona. He was born into a family of metalworkers, that for generations had intermarried with daughters of other smiths. Growing up in this dry Mediterranean environment, Gaudí was enamored of nature and the structure and form of the plants in the region in particular. This life-long interest and love of natural form found its way into the buildings that he designed, especially in Sagrada Família. Gaudí worked in the Art Nouveau style of the times initially, but grew as an artist / architect and devolved his own style that became more and more radical as time went on. The author Robert Hughes said that Gaudí used the most modern techniques of structure and construction to become more ancient. For instance, Gaudí modeled the structures of many buildings, including Sagrada Familia, in upside down string and weight fabrications at a 1:100 scale. He photographed the deformed shape of the model, turned the photo 180o, and then used it as the basis for the shapes of the un-reinforced daring arches that he built. The results were often bizarre as well — which confirmed the opinions of many about the bizarre nature of Barcelona and its inhabitants.

Sagrada Família is located in the Eixample (Extension in Catalan) section of Barcelona, which was developed in the 19th century in response to enormous industrialization and growth that Barcelona was undergoing. The old Gothic section couldn’t manage all of the expansion needed, so a whole new area was developed to the west with wide streets and boulevards where the buildings at intersections are all on a 45o angle, rendering the streets visually larger than they really are.

Sagrada Família started in 1866 with the formation of a right-wing conservative group of Catholic men that were devoted to the Holy Family in response to calls from the Pope. The Spiritual Association for Devotion to St. Joseph — the Josephines — was thus formed. A prominent local leader persuaded the group that Barcelona needed a permanent church devoted to Joseph, his virgin spouse, and their Son. There, the people could go and do penance for the sins of modernism — hence the official name: the Expiatory Temple of the Holy Family.

The Josephines raised considerable sums of money, bought the property in the Eixample, and hired an architect named Villar, who quit after a year and produced a mediocre Gothic revival design (part of which, the Chevet, was built). It should be pointed out that Villar oriented the church 180O opposite from how churches normally are oriented: the west front is the rear instead of the front. Somehow this fits the character of Catalunya with its penchant for bizarre and eccentric behavior and form. The group then hired Gaudí, who was given totally free rein.

Gaudí completely changed the design to reflect his evolving aesthetic. The north transept was the first to be built. It has the look of having been constructed out of snow that had partially begun to melt — various details are droopy and dissolving in appearance. It is no accident that Salvador Dalí, who is also a Catalan and was very familiar with Gaudí, championed Gaudí and fathered the surrealist movement in art, with the painting of the dissolving watch.

The south transept in the sketch was first constructed in 1903-1926. Gaudí did not live to see this portion completed as he was hit by a tram in 1924, and died three days later. The transepts and the nave are structured by strange inclined columns that branch at the top like trees, and then support domes — all based upon the string and weight models, trees and human bones somehow fused together into a coherent form.

The work remained uncompleted and worked on only in fits and starts as money became available to the private Josephines. In 1936, during the civil war, a mob broke into the church and destroyed all of Gaudí’s records, drawings and models. What is being built today is a reconstruction based upon photographs of these records as interpreted by others today. Modern structures and materials are being incorporated over many people’s objections. But there is no choice but to finish it.