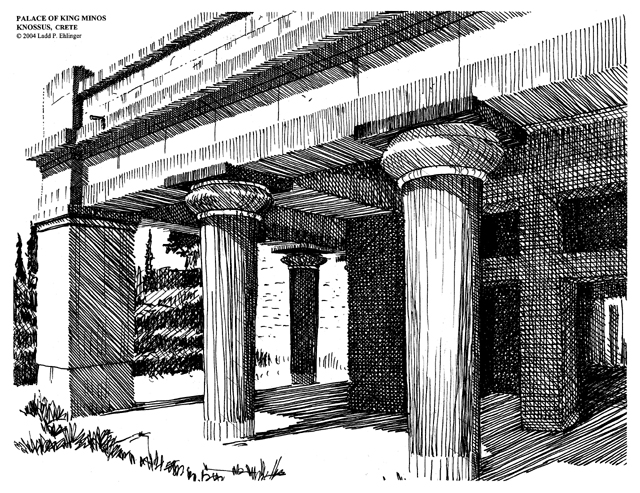 The Palace of King Minos, Knossus, Crete is the subject of this issue’s limited edition print of a sketch by Ladd P. Ehlinger. This palace was the center of what is known as the Aegean culture which flourished between 3000 and 1100 BC. This was an island architecture similar to Asian and Middle-Eastern, within which flat roofs dominated. This allowed the buildings to be contiguous with common or party walls, and for functions to take place on the roofs. The mainland architecture was dominated by pitched roofs, which was a response to the more rainy, northern climate.

The houses and palaces were the predominate type of buildings built in the Aegean culture, and incorporated mercantile and industrial functions within them. The temple form of building had not developed yet as the religion practice was vague, without personified images. Religious rituals usually took place within the courtyards.

King Minos’ Palace was planned as a series of connected buildings in a footprint of about four acres about a large central courtyard. It had apartments, a throne room, an archives/ library with thousands of inscribed clay tablets, and granary warehouses and shops surrounding this courtyard. There were several levels, with access between levels within each apartment by means of elaborate colon- naded stairways that also functioned as lightwells and vent- ilation shafts. Other purely colonnaded lightwells were also used, as most apart- ments had no win- dows other than those on these private lightwells.

The construc- tion of the palace consisted of both cut stone and plastered rubble stone walls built up to the door or transom head level, with the upper portion consisting of heavy timber framing supporting masonry. The cylindrical columns were of cypress with a downward taper, and supported a round bulbous echinus and squared capital separated by finely excised rings. The shaft sat on a stone base. The broad capital projection presaged the early Doric columns of Paestum that had huge capitals, and were necessary to support the immense weight above.

The walls and columns were often painted bright colors to distinguish them and decorate them, and often frescoes were painted to adorn them, especially in the King’s chambers. Gypsum was plentiful on Crete, and was used for the stucco, and as a fill for the roofs, and a paving for the floors.

This palace is where the worship of the bull as a symbol of masculine power took place. Rituals of dance and gymnastics took place with live bulls. The participants ran and vaulted over the bulls, not unlike the floor exercises in today’s Olympic games, and danced about the bulls as do the matadors in the bullfights that have continued to this day in Spain. Ornamental symbolic bull’s horns adorned various courtyards in the palace.