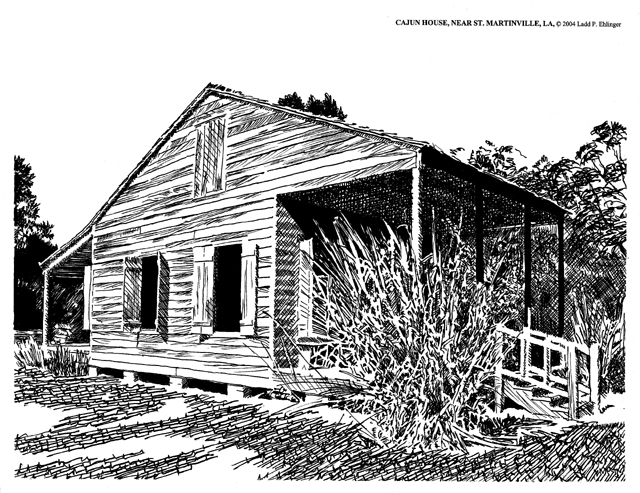 This month’s limited edition print of a sketch by Ladd P. Ehlinger is of a typical Cajun (Acadian or French Canadian) cottage. This particular one is located in the Evangeline State Park near St. Martinville, LA. This is a paradigm example of vernacular architecture.

When the English sent away the Acadians from Nova Scotia in the 19th Century, many of them came to south and southwest Louisiana where they settled in along the bayous, swamps, marshes and prairies of the region. The Acadians brought with them their knowledge of French colonial building expressed in this cottage.

This cottage has a front porch with three bays, gable roofed with wood shake shingles, sided with wood clapboards and framing of swamp tidewater cypress, wood windows and doors of the French type with vertical board shutters on strap hinges, all sitting on a brick pier foundation raised to protect from flooding and dampness. The rear porch was probably a later addition. The attic was accessible in this one from the gable shutter, and perhaps from inside. Some Cajun cottages had ladders on the front porch for attic access. The attics were used for sleeping as well as storage.

The plan of these houses typically had no hallways in the French manner and consisted of four rooms, all inter- connected. Privacy as we experience it today by hallways was not afforded.

The French construction technique of poteaux-en-terre (posts-in-earth), where posts were inserted into the ground was quickly abandoned in south Louisiana for poteaux-sur-solle (posts-on-a-sill) where the sills were supported by masonry piers that would not rot in the damp earth or be attacked by the ever prevalent termites.

There were urban as well as rural versions of these vernacular houses. Some had hipped roofs that were at two different slopes - a shallow slope on the porch and steeper one on the main house, but the basic plan with no hallways, the types of fenestration, shutters, and construction are the same. They are found in the Vieux Carré and in other sections of New Orleans as well as in the remainder of South Louisiana.