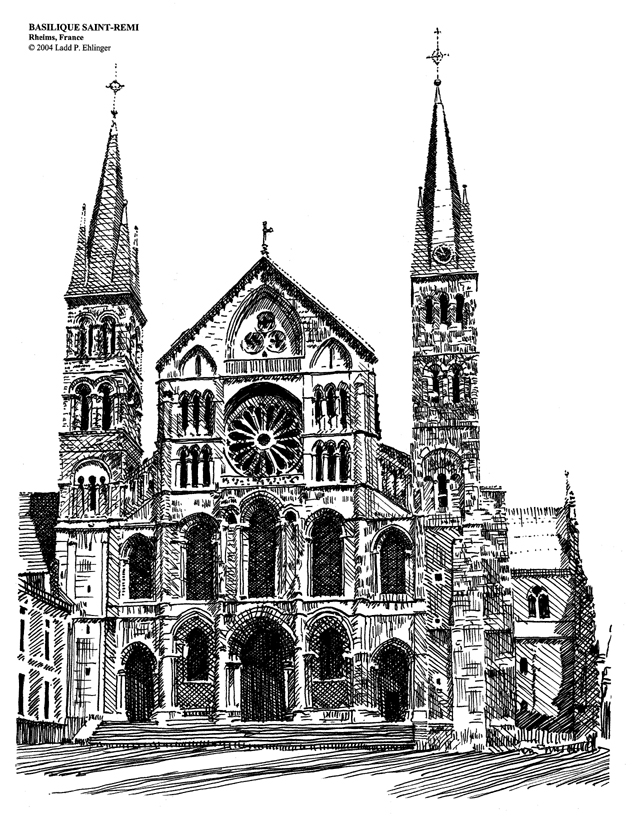 The Basilica of Saint-Rémi is an Abbey church that was begun in 1007 and was consecrated for use by Pope Léon IX in 1049. It was begun in the style of the time: Romanesque, which was a revival of Roman architecture that started at the end of the dark ages. The church became a continuing “work-in-progress” however, and was completed in the Gothic style with many modifications being made to the original Romanesque work to “Gothicize” it. So, it truly is a blend of the two styles and the sub-styles within them. The south tower of the west front (the tower on the right) in the sketch by Ladd Ehlinger is truly a remarkable Romanesque composition.

The Romanesque style is characterized by the use of circular arches with quite thick voussoirs (the wedge shaped arch stones), thick walls, and small windows - as if the architect were unsure of himself as to how minimal he could make the wall. The larger the window and the thinner the wall the more unstable the basic structure is. Romanesque construction is very conservative.

The Gothic style, on the other hand, is quite daring: it is characterized by the use of very large windows, thin walls, and the use of extravagant buttresses (braces) even to the use of flying buttresses, where the buttress has a diagonal brace up in the air that braces off to another structural wall or element. It is as if the Romanesque building was dissolving as it “morphed” into Gothic.

If one looks at the Nave elevation to the right as it was origin- ally designed, it is plainly a Romanesque design with a wooden roof structure. When one looks at the “Gothicized re-make” below, there is hardly any change. The triforium gallery has a Gothic pointed arch super- imposed on the wall and the pointed arch vaults at the top are fully Gothic - but nothing else is. There is no large window area added, no lightness of structure - only the superficial motif of the pointed arch has been added.

The choir shown in the upper right photo, however, is fully Gothic with the large windows and flying buttresses and the radiating chapels about the ambulatory.

The Basilica was named for Saint Remigius. His name was originally in Latin. His tomb is in the Choir which was rebuilt in 1847. This was an important pilgrimage site, as well as a monastery in northern France in the Champagne region.