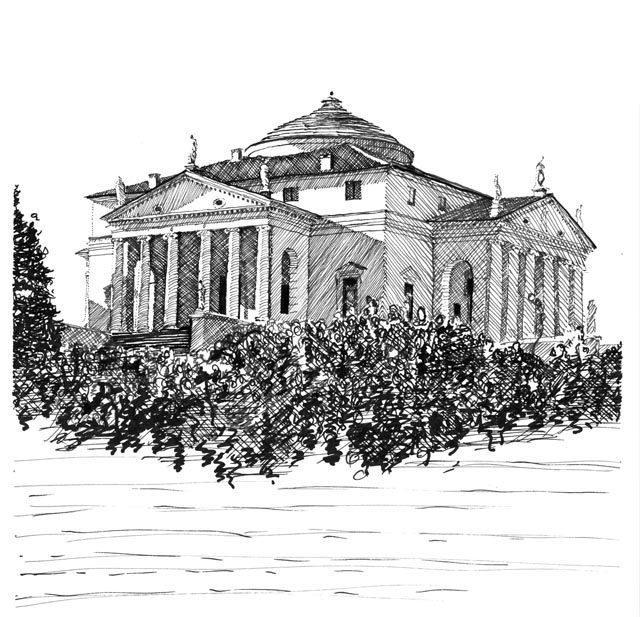 Villa Rotunda is this issue’s limited edition print of a sketch by Ladd P. Ehlinger, that was designed by the famous architect Andrea Palladio. Otherwise known as Villa Capra, this villa is of the type: villa suburbana, as Palladio classed it. It is of the genre of estate mansions favored by the Venetians in the 16th century, that are revivals of the Roman countryside mansions for the landed gentry. Those people, the landed gentry, that owned farms would build these types of houses on their lands that were worked by tenant farmers, so as to have a place to stay when checking on their tenants and when escaping the confines of the large city.

The Brenta River that empties into the Adriatic near Venice is dotted with villas like Villa Rotunda on both banks, and many were designed by Palladio. Villa Rotunda is located just outside Vicenza, west of the Brenta River villas. The influence of these villas was far reaching in time and inspired much of the southern US architecture of the 18th and 19th centuries, especially on plantations. The formal beauty of this particular building inspired several copies of it to be built in England, and numerous other villas similar in design to be built also, particularly by Inigo Jones.

Villa Rotunda sits atop a hill commanding the plowed field beneath it, and the entire countryside around it. The design is very symmetrical, and followed strict mathematical rules of proportion, both in plan and spatially as well. Like many of Palladio’s villas, this one is organized around a central room that is topped with a dome. The main temple like entrance with large formal stairs is repeated on the other three sides also. Construction was started about 1550, and was completed after Palladio’s death by Vincenzo Scamozzi, his apprentice.

Scamozzi altered the design of the dome by extending the cylinder it rests upon above the roof juncture line, and the shape of the dome itself, and raising the attic (roof slope). If you look carefully, there is a rather awkward curve of the juncture of the roofs with this cylindrical dome support structure that resulted from this change. It is more likely that Palladio intended to extend the square walls that surrounded the cylindrical structure above the roof juncture slightly, and to have almost flat roofs on the tops of the curved corners left by the dome that would have resulted from this approach.