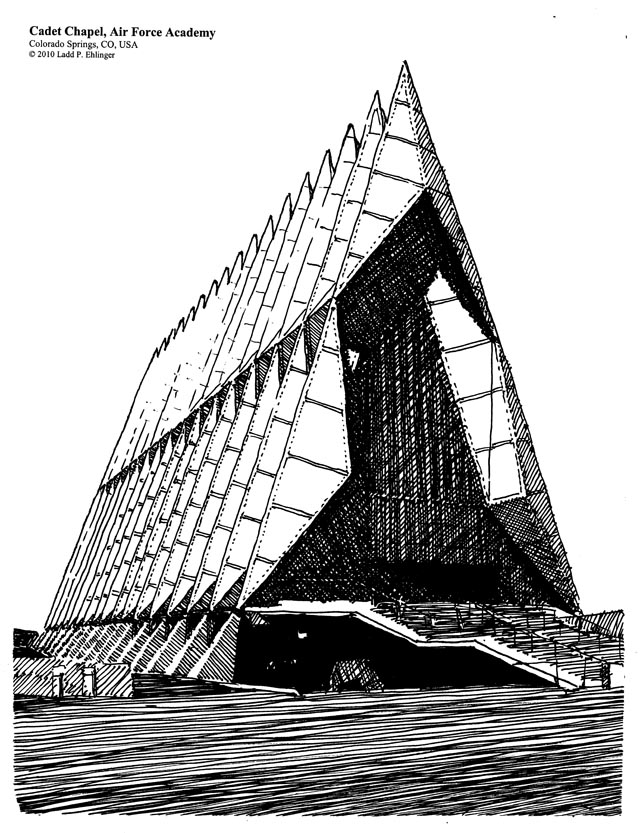 The Chapel is the centerpiece of the entire ensemble of buildings, all of which (except the Chapel) are designed in the International Style of modernism, so effortlessly confected by SOM, a Master of and famous professionally for this genre. Because the Chapel is so expressive it was highly controversial, initially for its contrasting form said to be an ab- straction of a group of fighter jet planes zooming into the sky, and later for its high maintenance because of leaks and other detailing problems. Despite the con- troversy (or perhaps because of it), the Chapel received the Twenty-five Year de- sign Award from the American In- stitute of Architects in 1996, and was named a Nat- ional Historic Land- mark in 2004.

This issue’s limited edition print of a sketch by Ladd P. Ehlinger, AIA, is of the front entry, which is from a raised platform midway between the two major floors of the Chapel. One goes up to the Protestant Chapel on the upper floor, and one goes down to the Catholic Chapel and the Jewish Chapel below. There is also an “all faiths” chapel in the basement. One is unsure of the symbolism of this placement: the Protestant faiths are founded on a Judeo-Catholic base? Or Jews and Catholics are less important that Protestants? Or it simply reflects the demographics?

The basic structure of the Chapel is composed of steel tube tetrahedrons sheathed in aluminum plate panels that are spaced one foot apart, and terminate at the top in seventeen spires. The one foot space between each group of tetrahedrons is infilled with stained glass, giving a striking effect on the interior.

The Protestant Chapel is on the upper floor and its walls / ceiling are formed directly by the tetrahedrons and the stained glass infills, which become progressively lighter as they get nearer the altar opposite the entry.. It seats 1,200 Cadets who face a chancel with a multi-colored reredos that is semi-circular in plan and encompasses a 46' high aluminum cross. The pews were sculpted on the ends to resemble propellers and on the rear the trailing edge of a wing. Above the narthex (entry) is a balcony for the choir with a large pipe organ.

The Catholic Chapel below seats 500 people. Its focal point is the reredos behind the altar which is composed of multi-colored glass mosaics. There are statues here of Carrera marble of the Virgin Mary and the Archangel Gabriel. There is also a choir loft with 100 seats and a pipe organ.

The Jewish Chapel is also below, and is circular in plan with a 42' diameter defined by a vertical grill with glass inserts designed to suggest a tent-like structure. The vertical stanchions of the grill are of Israeli cypress and the floor paving is of Jerusalem brownstone donated by the Israeli Defense Forces. 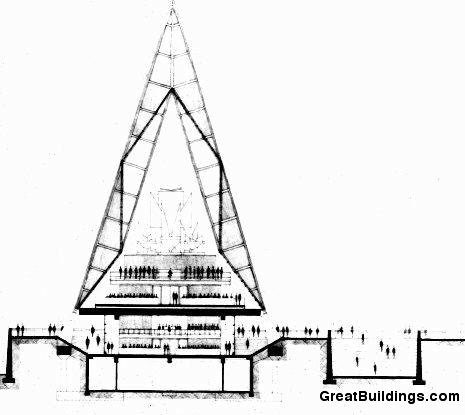