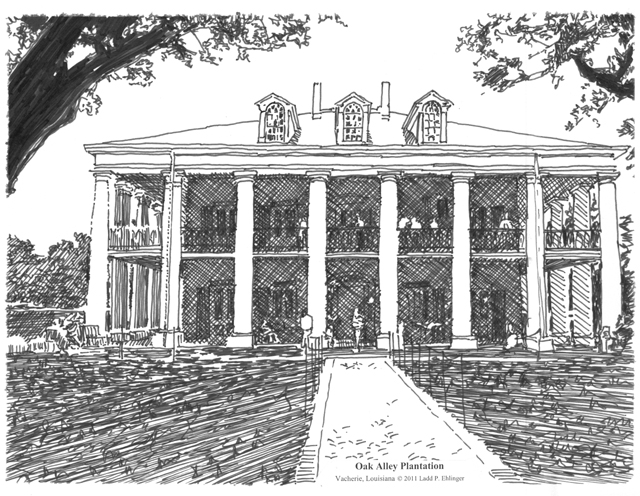 Oak Alley Plantation is a historic plantation located on the Mississippi River in the vicinity of Vacherie, Louisiana just upriver from New Orleans. Its name derives from the double row alley of oaks between the house and the Mississippi River that were planted by an unknown settler in the late 17th century to the early 18th century, probably ca. 1715, long before the house was built. One interesting aspect of the nearby town’s name, Vacherie, is its double meaning: in archaic French, it meant the place of cows, and it also means what we would call in English a “catty”, snide or nasty remark or action. There is a French custom to display dinner plates on a stand or on the wall upon which are painted scenes that express and are titled with a witty “vacherie”.

Originally named “Bon Séjour” (“Good Stay”), the mansion was built for the sugar plantation by George Swainey in 1837 to 1839 for Jacques Tele- sphore Roman, brother of Andre Roman, twice Governor of Lou- isiana. Joseph Pilie is widely considered to be the architect as he was the father-in-law of Jacques. The Roman fam- ily in the person of Jacques Joseph Roman is thought to have come to Louisiana in ca. 1728 from the area around Grenoble, France to administer the affairs of his cousin, Joseph du Vernay, who had been given a large land grant upriver from New Orleans. The family prospered by buying, selling and managing plantations through multiple generations. The initial owner of Oak Alley that caused it to be built was Jacques Joseph’s grandson.

The floor plan of the mansion is square with 28 peripteral (perimeter free standing) colossal Doric columns on each facade on the outside of the 13' wide gallery. The plan is characterized by a central hall on both floors with fan light doors on each end from which all rooms are entered, and by 12' high ceilings. The high ceilings, shade from the galleries, and operable doors and windows that opposed each other rendered a cool interior even on the hottest days during those times of no air conditioning. The flooring was originally of marble, and is now wood. The walls and columns are of painted plastered brick, the spanning members are of wood with painted plaster ceilings. The roof is of slate on a wood deck.

There was an Oak Alley slave named Antoine, who was 38 years old at the time of Jacques Roman’s death, and was listed in the estate as a gardener / expert grafter of pecan trees. It is Antoine we have to thank for development of what was then a new variety of pecan trees in 1846-47: “paper shell” pecans, the nut of which one could crack open with one’s bare hands. This pecan won a prize in the 1876 Centennial Exposition in Philadelphia. These trees are now found throughout southern Louisiana and other states.

After the Civil War, the fortunes of the Roman family reached a nadir, and the mansion was sold at auction in 1866. It went through a succession of owners and fell into disrepair. It was acquired by Andrew and Josephine Stewart in 1925, and they com- missioned the architect Richard Koch to design extensive restoration work. After Mrs. Stewart’s death, the mansion was placed in the hands of a non-profit organization to own and manage and opened to the public, lately as a bed and breakfast. It has also been listed on the U.S. National Register of Historic Places and is a U.S. National Historic Landmark.