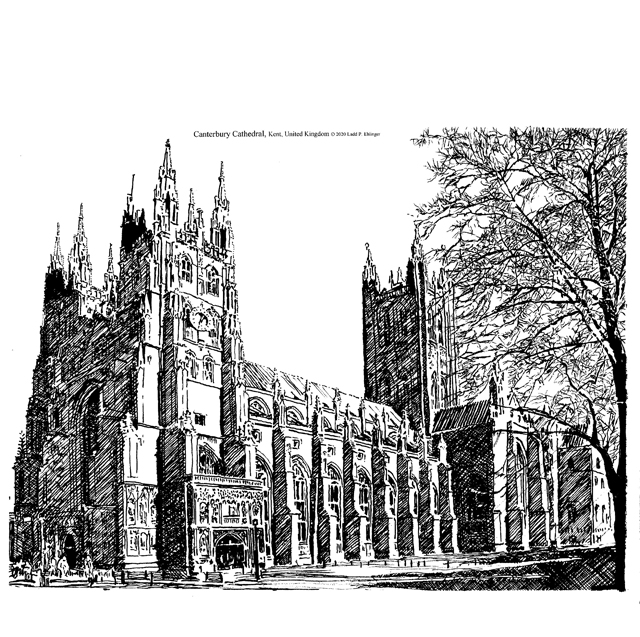 The Pantheon in Rome is the subject of this issue's limited edition print of a sketch by Ladd P. Ehlinger, AIA. This sketch shows the north elevation. This building was built and rebuilt several times. Marcus Agrippa, a Consul during the reign of Augustus (27 BCE - 14 CE), built the first Roman temple on this site. It was rebuilt by Trajan and Hadrian after horrendous fires. In the reconstructions, the slope of the of the pediment's roof on the portico was increased and changed from southern facing to northern facing. Most everything else was salvaged, including the original inscription:

“M[ARCUS] AGRIPPA F[ILIUS] CO[N]S[UL] TERTIUM FECIT,” meaning: “Marcus Agrippa, son of Lucius, made [this building] when consul for the third time.” An additional inscription not visible in the sketch below that was made by the emperors Severus and Caracalla, which noted their restoration of the building in the year 202 AD.

The architect for the Hadrian rebuilding was Apollodorus of Damascus. This rebuilding took place from 113 to 125 AD. He made the cella (main worship space) behind the portico circular and covered it with a dome of masonry and concrete. This dome is designed of totally compressive forces with no tensile structural components to remove the thrust at the base of the dome. It is still the world's largest span (142' or 43 M) unreinforced dome. To reduce weight, there were coffers (recessed panels) inserted in the lower surface region of the dome, and the materials used were heavier at the lower regions of the dome, such as stone, brick masonry, tile masonry and concrete, with the upper regions composed of pumice and tufa, lighter stones of volcanic origin. The oculus, or eye, at the top of the dome was left open to the sky and its height equals the diameter of the dome - 142', and the interior floor was sloped to drain to internal drains.

The Romans had the equivalent of our Portland cement that we make concrete from, which they called “Pozzalana.” It was mined from volcanic sites where the heat of the volcanic activity was sufficient to cause the chemical reaction on the limestone to produce the hydraulic cement. The Romans learned that if crushed into a powder, and combined with water, the Pozzalana would react with the water and produce a rock hard substance similar to today's concrete. Aggregates (fillers) of crushed masonry, stone etc. were added to reduce the amount of Pozzalana needed. Domes, vaults, and walls would be constructed with a shell of stone, brick or tile masonry and its voids were filled with concrete.

Pantheon meant a temple dedicated for many gods. After the fall of Rome, in the 7th century, the Catholic church took over the building dedicated it to “St. Mary and the Martyrs”. It has been in continuous use since its construction. During times of unrest and civil breakdown though, parts of the building were vandalized and stolen as well, such as the bronze shingles that were removed and melted down, similarly the bronze ceiling of the Portico, and all of the rooftop statuary.

The Pantheon has influenced numerous buildings since its construction, notably: Hagia Sophia (532-537) in Constantinople (now Istanbul), the “Duomo” (Santa Maria del Fiore) in Florence (1296-1436), Thomas Jefferson's Library at the University of Virginia (1817-1826), and nearly all mosques of the Islamic faith (Suleimaniye Mosque, Blue Mosque, Dome of the Rock) in all Islamic countries.