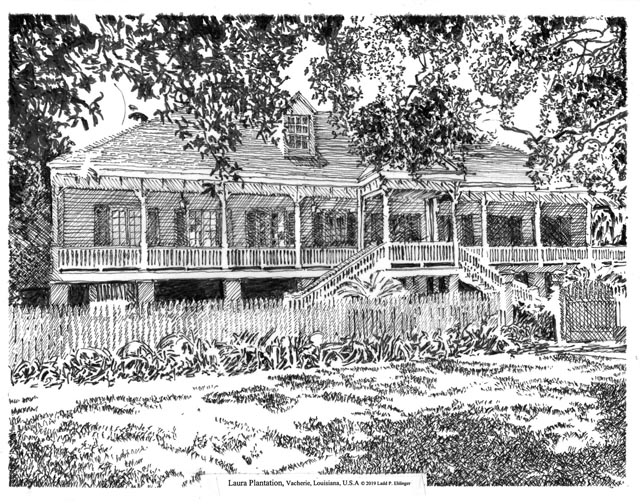 Laura is located in Vacherie in St. James Parish on the west bank of the Mississippi River. The view of a sketch by Ladd P. Ehlinger is of the front, north facade. Laura Plantation has a fascinating varied history involving architectural history, African folk tales, and Louisiana inheritance lore.

Architecturally, this plantation house was built in the French colonial island style in 1804-05 by its first owners, the Guillaume Duparc family, and it was called the Duparc Plantation. They were Creoles (of French and Spanish blood, born in the new world) and acquired the land in a land grant from Thomas Jefferson in return for Guillaume Duparc's naval services in the U. S. Revolutionary War. The name was later changed to “Laura” in honor of Laura Duparc, the last Duparc family member who ran the plantation for the longest period of time after which it was sold to others. The planning of the house was in the French style with interconnected rooms and no halls anywhere. The house was originally “U” shaped in plan with two wings to the rear, and a separate building centered on the “U” for the Kitchen, to prevent fire in the main house. The construction was brick masonry on the ground floor basement founded in the ground on pyramidal brick footings, and brick floors with bricquette-entrepoteaux (brick between posts) on the second level walls, which were plastered over, and wood beams and Norman roof truss that were prefabricated off-site, and assembled on site. There is a front and a rear porch, each of wood. The entire facility is very similar to Madame John’s Legacy, the subject of a previous newsletter.

There are many out buildings that remain on the site: slave cabins (lived in until 1977), a maison de reprise (retirement home), communal kitchens, a slave infirmary, and several water wells.

Its interesting that the modern French meaning of “vacherie”, the unincorporated area where Laura is located, is to either play a dirty trick on someone or to make a nasty or catty remark about someone. Today, one can buy in Paris decorated painted dinner plates for display that have painted on them "vacheries". It has been speculated that in archaic French of the 18th century, vacherie may have also meant a place of cows or dairy.

Alcée Fortier was born on Petit Versailles, his family’s plantation nearby to Laura Plantation, was a Creole himself, and spoke several languages. He became a Professor of Romance Languages and History at what is now Tulane University in New Orleans. He recorded and published stories of freed slaves of Laura Plantation beginning in the early 1870s. These were African folk tales mostly from Senegal, that were kept alive in their oral history. In French, they were about Frère Lapin and Frère Renard - in English in dialect: Br’er Rabbit and Br’er Fox. Fortier’s scholarly work preceded the fictional work of Joel Chandler Harris, published in the 1890s, which Disney made into a movie in 1946: “Song of the South” featuring "Uncle Remus."