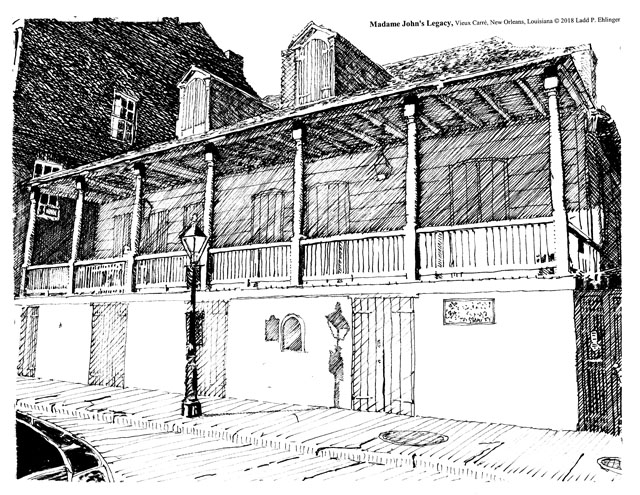 “Madame John’s Legacy” derives its name from the 1874 short story by George Washington Cable titled “Tite Poulette”. Cable was a newspaper reporter / author, and in this story he memorialized in fiction the duplicitous and scandalous behavior of the white male Creole (then defined as French + Spanish heritage) ruling class of the New Orleans at the time, where they maintained a second household with mulatto or quadroon mistresses, including separate families by the mistresses. Upon his death, Monsieur John willed this house at 632 Dumaine St. to his mistress and her daughter. Of course, there was never a Monsieur John in ownership of the house, but the story fascinated locals and the entire country for that matter, and the house was christened with the name perhaps forever.

The house was actually owned by some very interesting people over the years. The first owner was a Jean Pascal, who acquired the land in 1726 with his wife and child. Its not clear exactly when the first house was built, but many historians believe that it occurred in 1728. Pascal was a native of Provence, France and emigrated to New Orleans as an employee of the Company of the Indies. The next owner was Renato Beluche, Sr., who was a French wigmaker. His fifth son, Rene’, born in the house in 1780, became a famous pirate and compatriot of Jean Lafitte and also fought in the battle of New Orleans in the War of 1812 (1815).

The next owner was a Spanish military officer named Manuel de Lanzos. During his ownership, the house burned in the great New Orleans fire of 1788 - I believe to the top of the first floor masonry walls, as there are still charred timbers on top of these walls. Lanzos salvaged what he could from the house and had it rebuilt most likely with materials salvaged from other buildings that also burned or partially burned in the same fire. I say this because much of the superstructure appears adaptive in the sense that it was originally designed for somewhere else, particularly the structure in the attic.

Eventually the house passed through a few more owners to the son of William C.C. Claiborne, first governor of Louisiana under United States jurisdiction after the Louisiana Purchase. Then a succession of Italian immigrants owned the house until the 1920s, when it was purchased by Stella Hirsch Lemann, who rented out suites to artists and upon her death willed it to the Louisiana State Museum in 1947.

Madame John’s Legacy is thus the oldest surviving building in the French Quarter, and is a prime example of French Creole Colonial architecture. There are similar examples elsewhere in the city and in the state but not nearly as old. The construction is totally brick masonry on the first level with the exterior wall coated in stucco, heavy timber framing on the second level with brick masonry in-fill (Briquette entre Poteaux) with the exterior walls sheathed in clapboards and the interior walls plastered, the attic is framed in heavy timber, and the roof is slate shingled.

E&A was selected by the State to design new roofing, waterproofing and masonry repairs for Madame John’s. We are designing a new slate roof, and designing dampproofing the first level masonry walls with chemical injections to stop the rising damp and efflorescence (salt blooms on the surface of the masonry), and designing a coating to stop rain water intrusion.