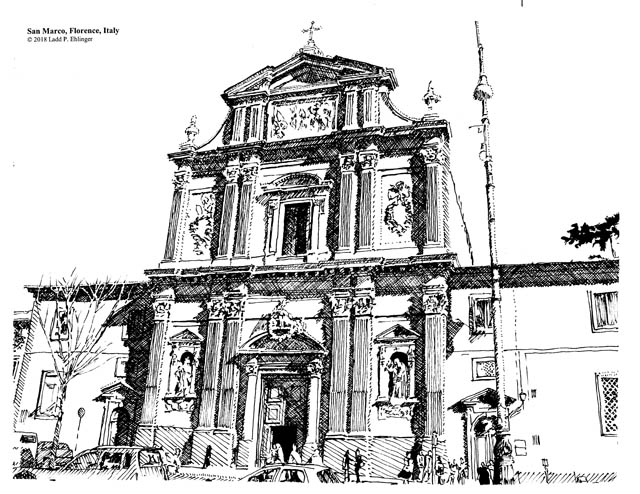 San Marco in Florence, Italy fronts on the square with the same name. This church used to serve a convent of Benedictine friars, that is a present day museum. There is a long history of convents occupying this site. There was a Vallombrosan monastery in the 12th century, which later passed to the Sylvestrine monks. Both groups were branches of the Order of St. Benedict. During the time of the Sylvestrines, the church served as a parish as well as a monastic church. Because of the laxity of observance of the Sylvestrines, complaints were made to the Papacy, and Pope Eugene IV forced them to vacate the buildings, and pass them on to a Domenican group from Fiesole. This was facilitated by the intervention of Cosimo de’ Medici the Elder, who lived nearby in the Palazzo Medici-Riccardi, by funding major renovations of the buildings.

The church was designed by the architect Giambologna as a single nave with side chapels in the late 16th Century. The Neo-Classical facade, shown in the sketch by Ladd P. Ehlinger, was not built until 1777-1778. Giambologna also completed the famous Salviati Chapel in May 1589. The chapel was decorated in fresco by Domenico Passignano with the Translation and Funeral of San Antonio Perozzi. The chapel dome was by Bernardino Pocetti who also authored frescoes in the Sacrament Chapel. The church contains numerous artworks, the most famous of which is the crucifix on the high altar by Fra Angelico. Other artists works are by Santi de Tito of St. Thomas Praying, and Madonna with Saints by Fra Bartolomeo.

San Marco was the home also of the fiery Friar and Prior Girolamo Savanarola from 1489 until his death almost ten years later. He came to martyr’s death because of his scolding of the Florentines morals, or rather lack of, and ostentatious behavior as a result. His preaching and behavior offended Pope Alexander VI Borgia, which resulted in him being burned at the stake in front of the Palazzo della Signoria.

The convent boasts of a library designed by the architect Michelozzo, who worked on the San Marco complex from 1439-1444. The rest of the convent is of simple Renaissance design, elegant, and very spare at that, with hardly any frills. The internal walls are whitewashed plaster in the two cloisters, with a Chapter House, two refectories and guest quarters on the ground level; all work on the convent was finished by 1442.

The Convent is now the home to the Museo Nazionale di San Marco. The entrance is decorated with frescoes by Bernadino Pocetti. It was only recently converted to a museum, as the Friars only moved out in 2014 to the monastery nearby at Santa Maria Novella.